The Route To Everest

Everyone has heard of The Himalayas and Mount Everest in particular.  Yet most everyone has only a vague understanding of the most famous and highest mountain range on earth, and where the great mountains among them are in relation to each other.

In this series, your understanding will become clear, no longer vague.  We start with exploring the Route to Everest.

The Himalayas are primarily in Nepal, with four the highest – Cho Oyo, Everest, Lhotse, and Makalu – on the border with Chinese Tibet.  Thus you can trek to or climb them from either the Nepali (south) or Tibetan (north) side. 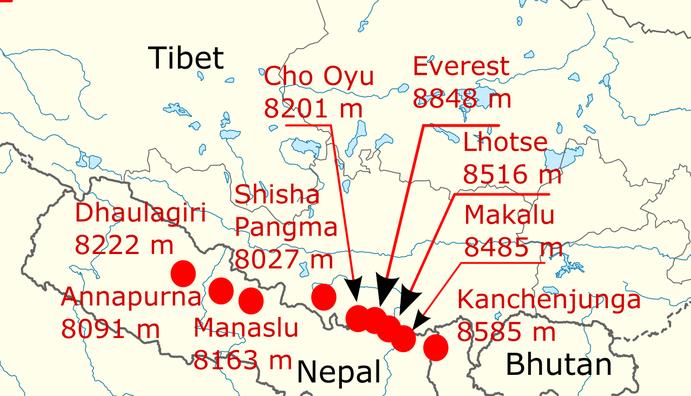 This week we’ll explore the route to Everest and its sister peak of Lhotse via Cho Oyo in Nepal.  From Cho Oyo flows the largest glacier in the Nepali Himalayas, the giant Ngozumpa Glacier which has a series of beautiful lakes, the Gokyo Lakes, alongside.  That’s what you see in the photo above.

Looking to your right, you see the fifth Gokyo Lake and the source of the Ngozumpa, the 6th highest mountain on earth at 8,201 meters, Cho Oyo, the Turquoise Goddess in Tibetan.  Up close the sight is overwhelming. 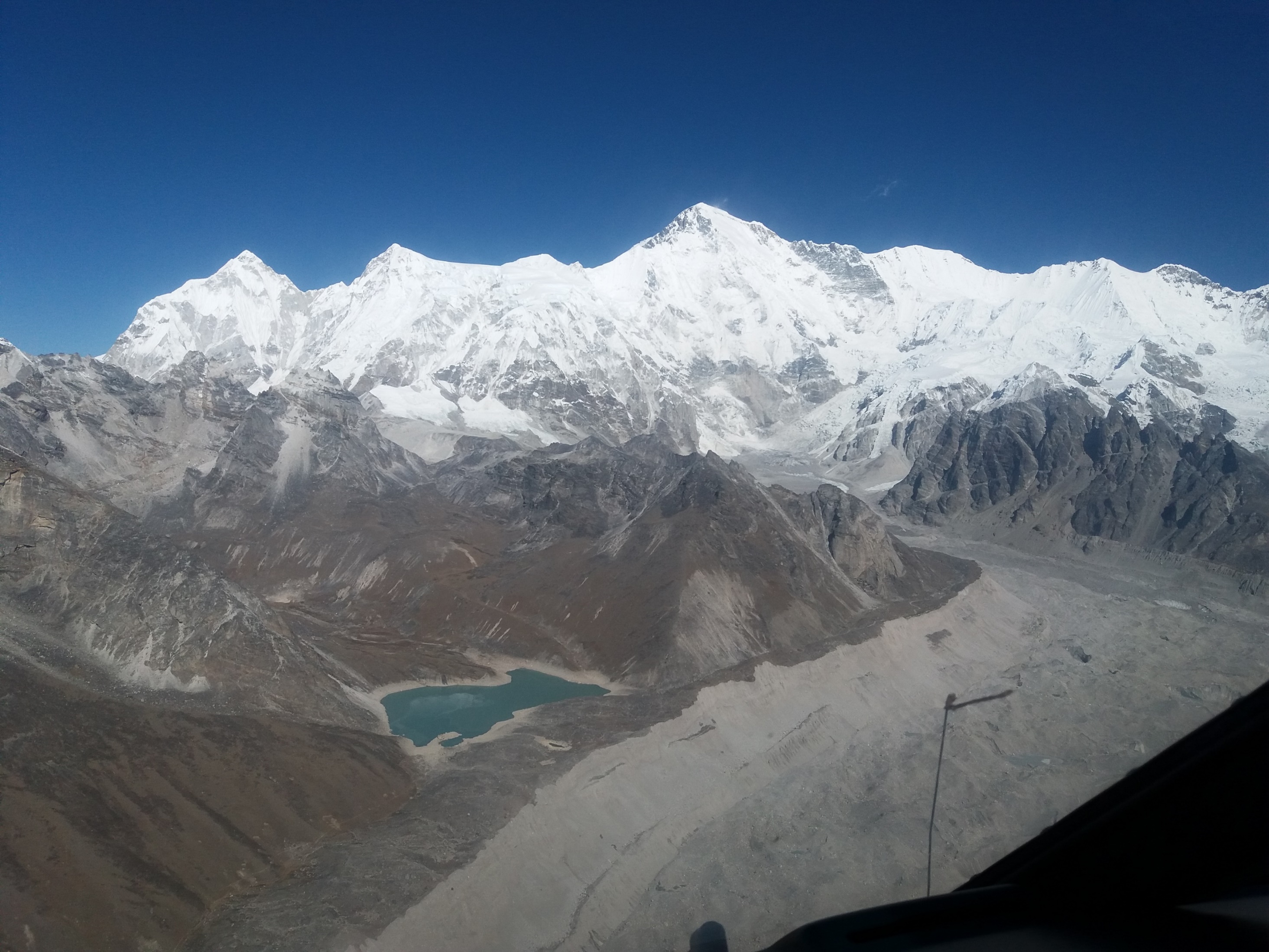 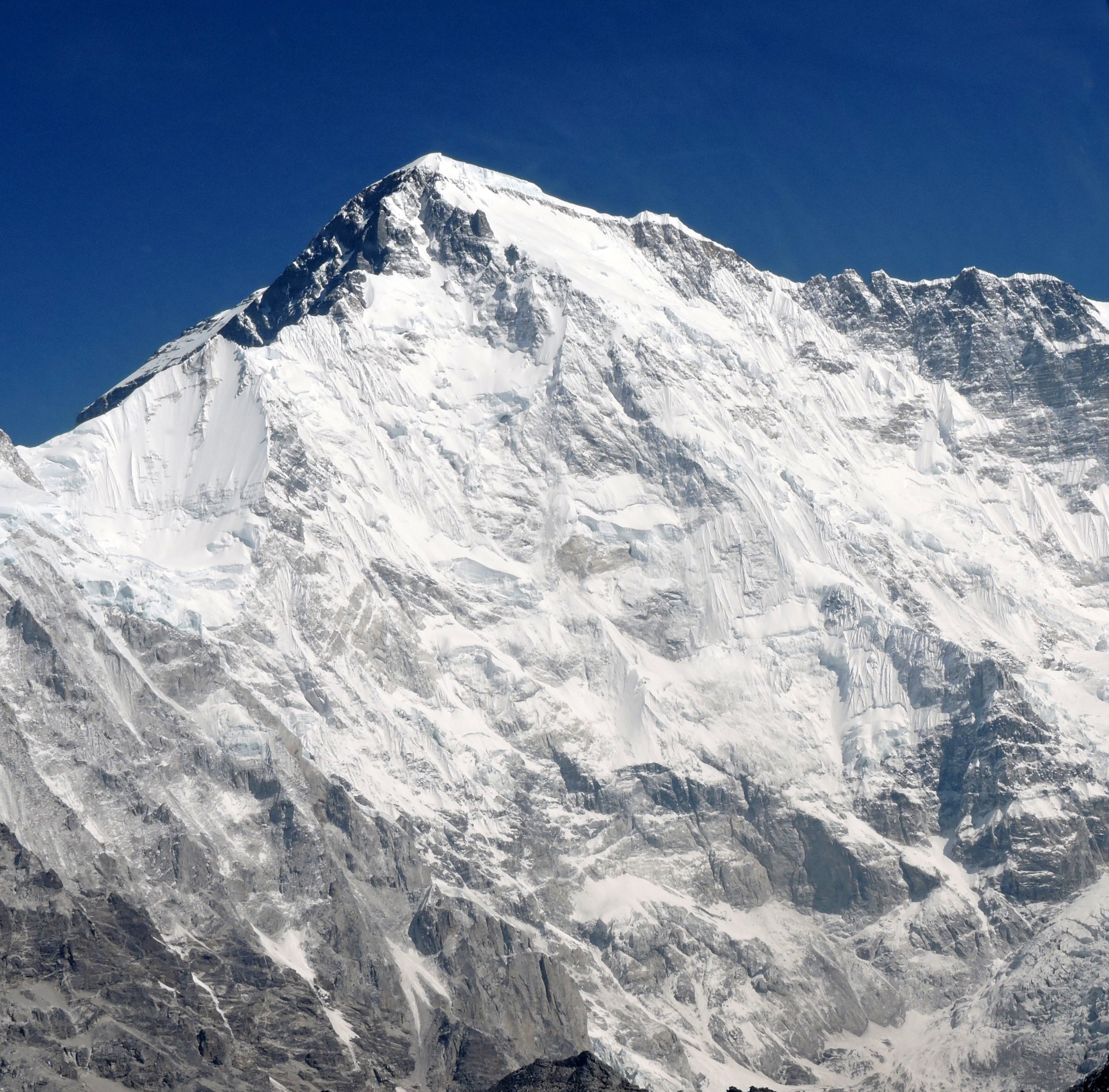 With the south face of the Turquoise Goddess in front of you, if you look to the right past the head of Ngozumpa, you’ll see two peaks with clouds streaming off their summits:  Mount Everest and Lhotse. 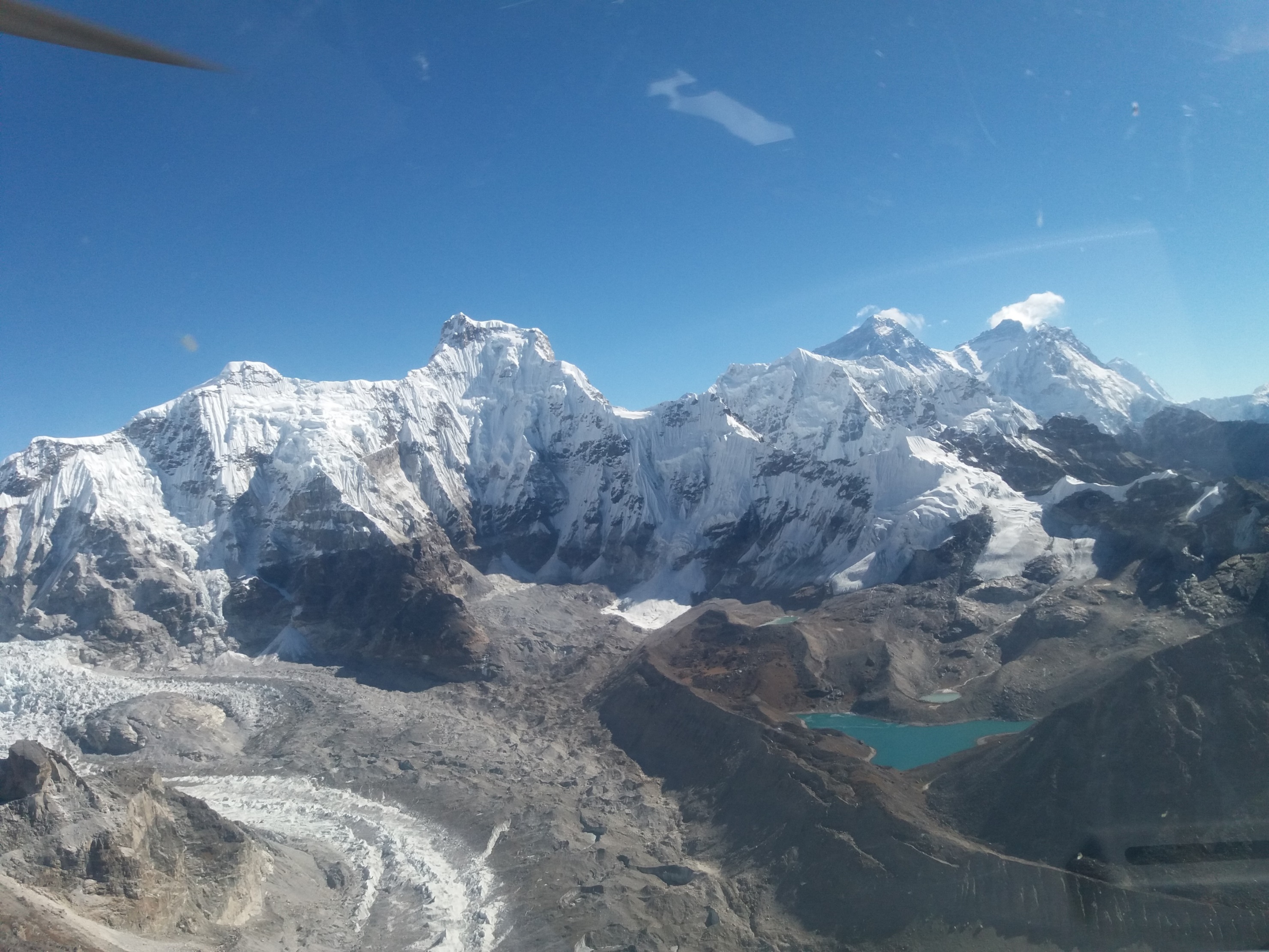 Flying in our high altitude helicopters straight for Everest skirting the border with Tibet, we can see the entire Tibetan North Face of Everest on the left and the Nepal Southwest Face on the right.  The ridge running down between them is the Tibet-Nepal border. 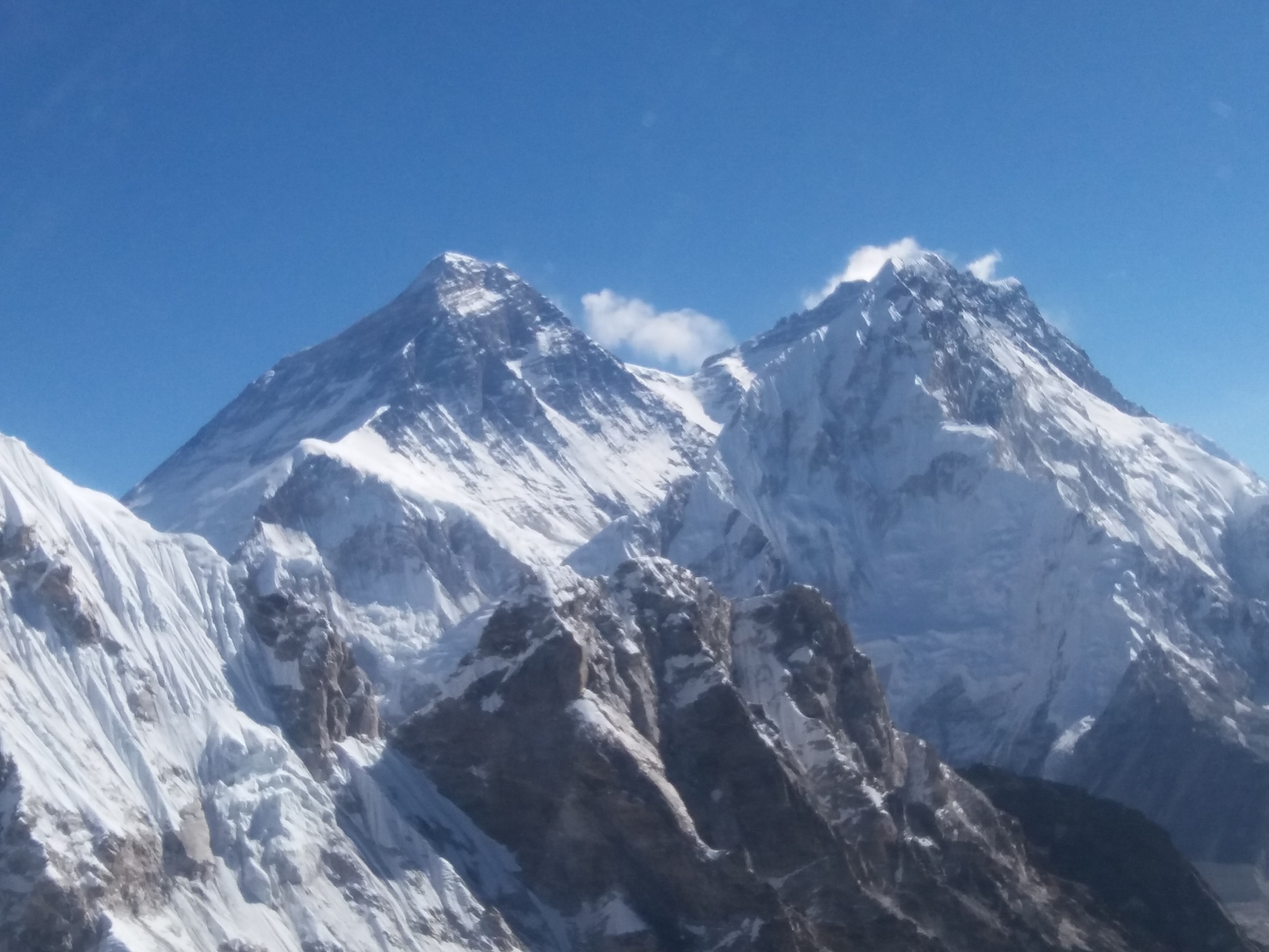 Closer, we peer into Tibet, glimpsing Everest’s satellite peak of Changtse and the notch of the North Col between them.  To climb Everest in Tibet, you ascend to the North Col from the other side in the photo, then the Northeast Ridge which you can see entire on the horizon. 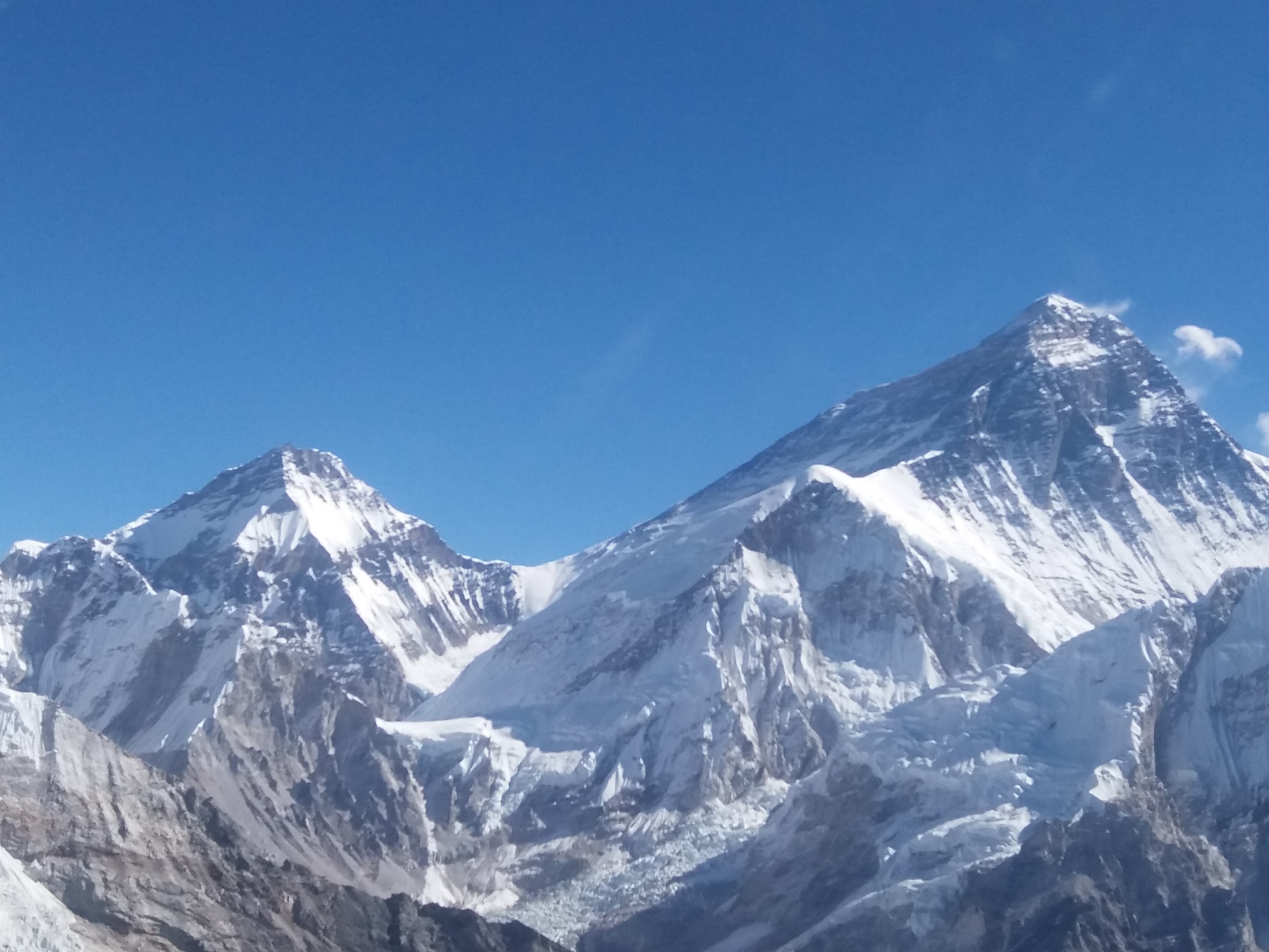 Closer and looking down, we see the famous Khumbu Ice Fall spilling out of the high valley, called the Western Cwm, below Everest’s Nepali side, and curving into the Khumbu Glacier.  On the outside of that curve is Everest Base Camp.  Note that you can only see these views of Everest from a high altitude helicopter. 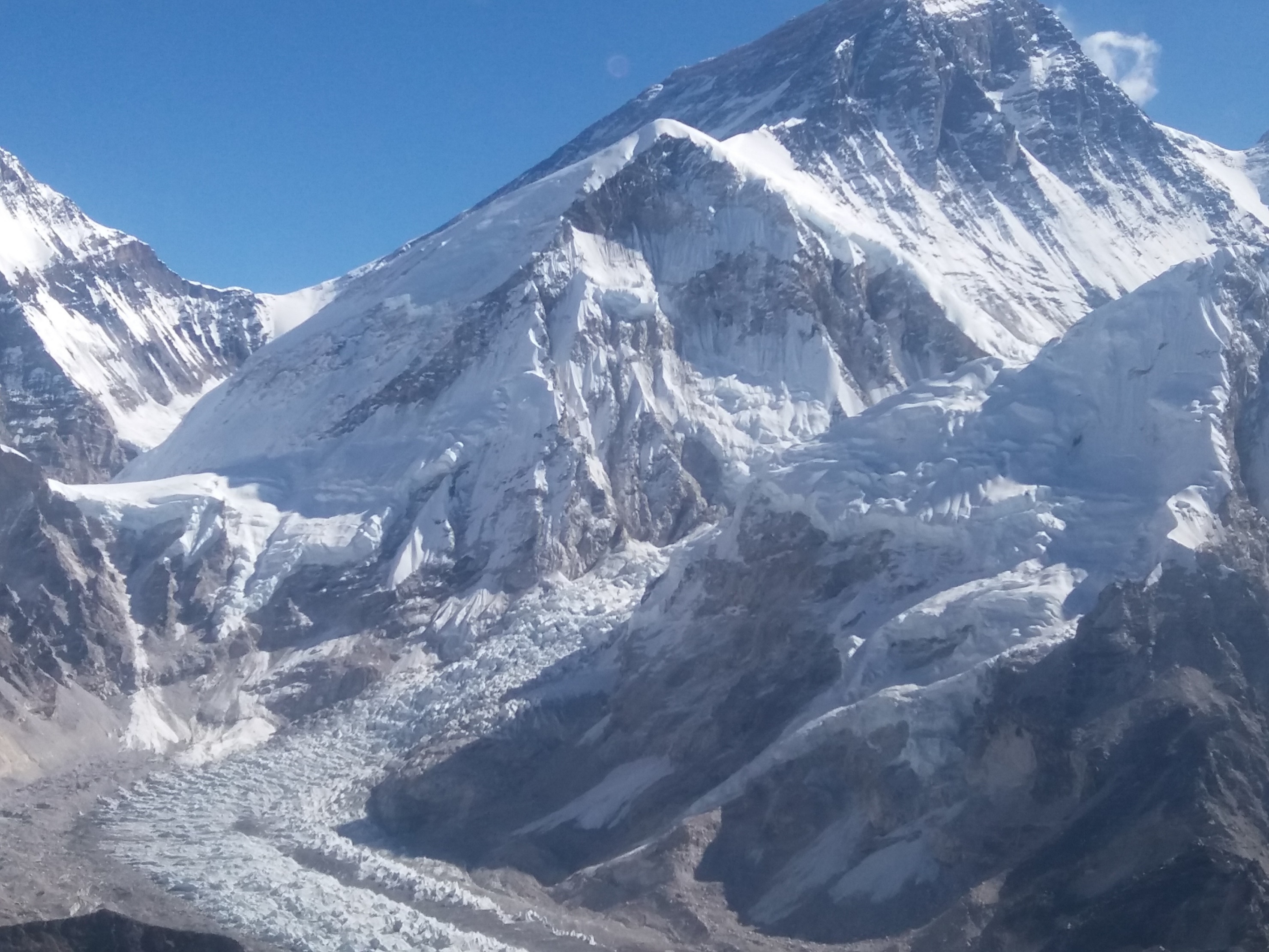 Here we are landing on the helipad at the base of the Khumbu Ice Fall.  The huge mountain above is not Everest itself, merely the Everest West Shoulder. 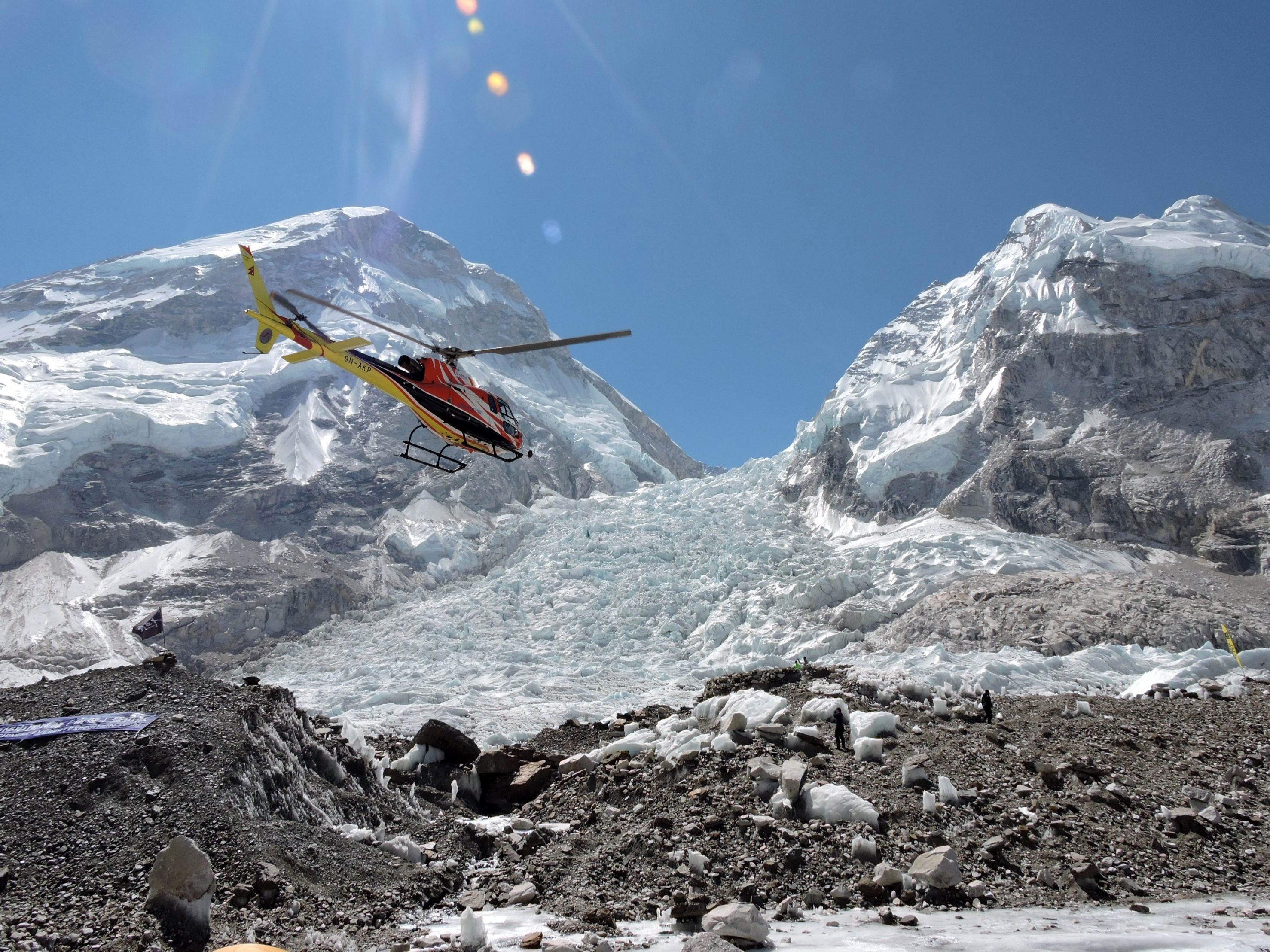 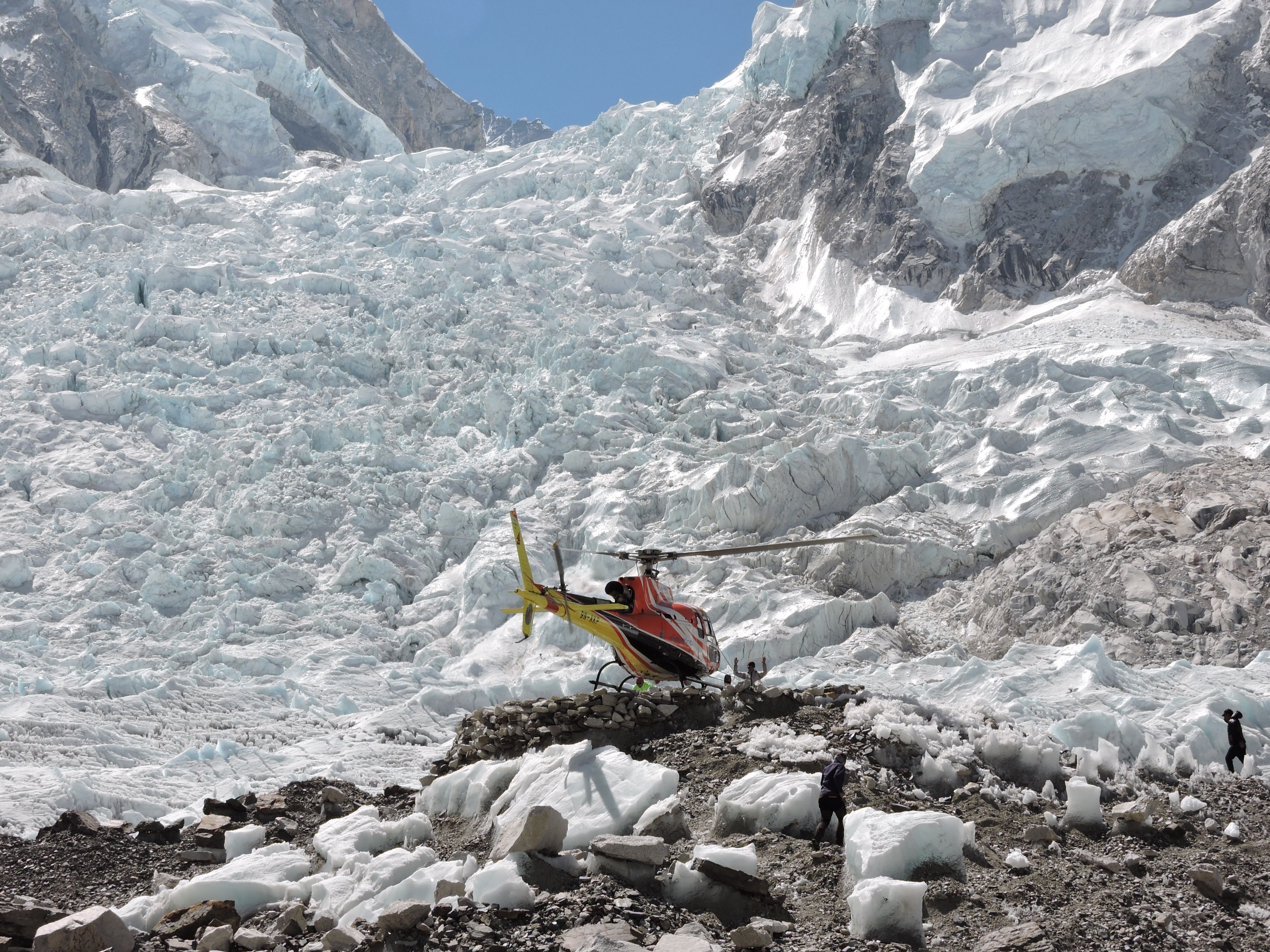 Yet even though you can’t see Everest itself, nor Lhotse, from Everest-Lhotse Base Camp, it is still an extraordinary experience to be there. 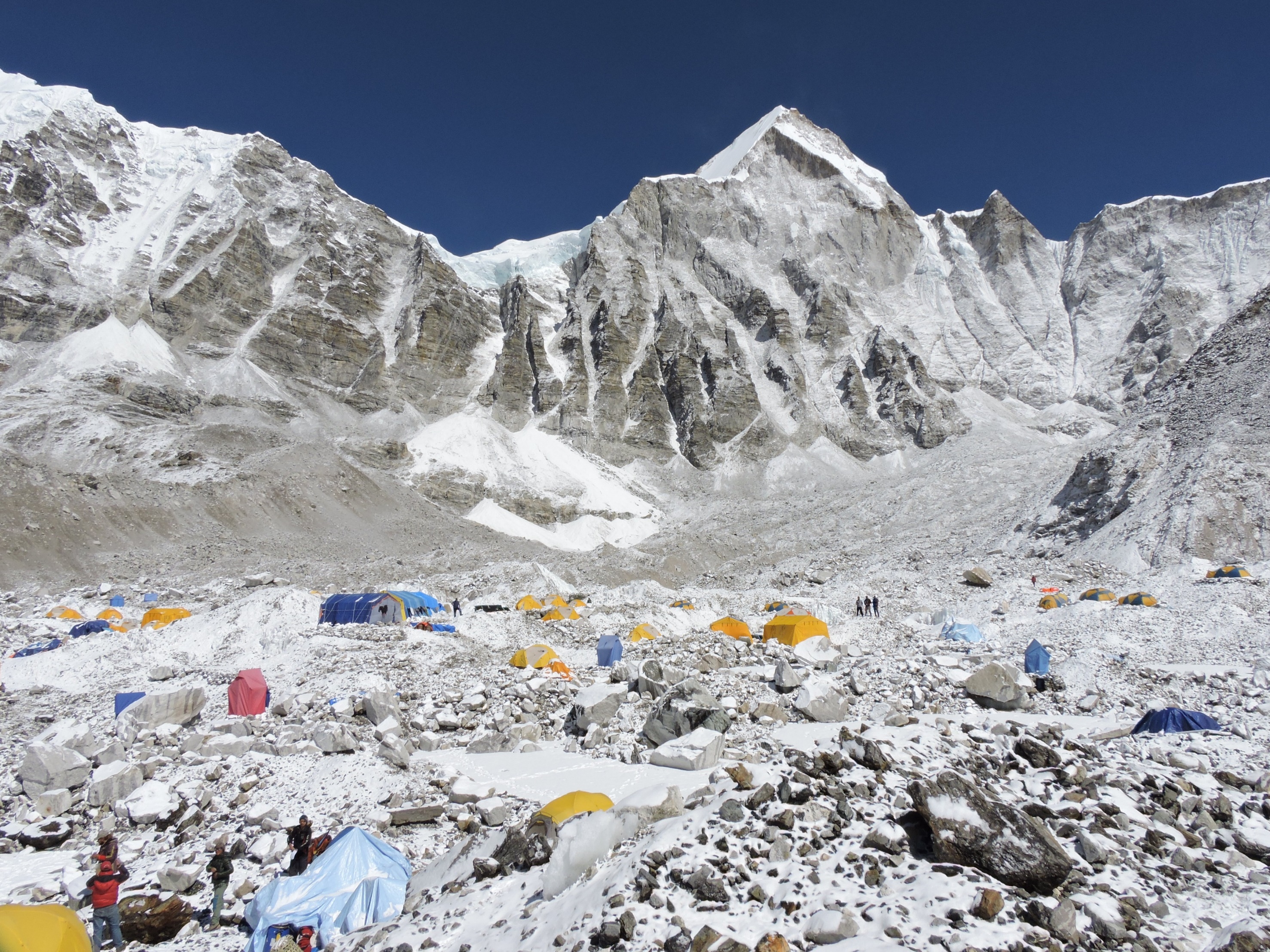 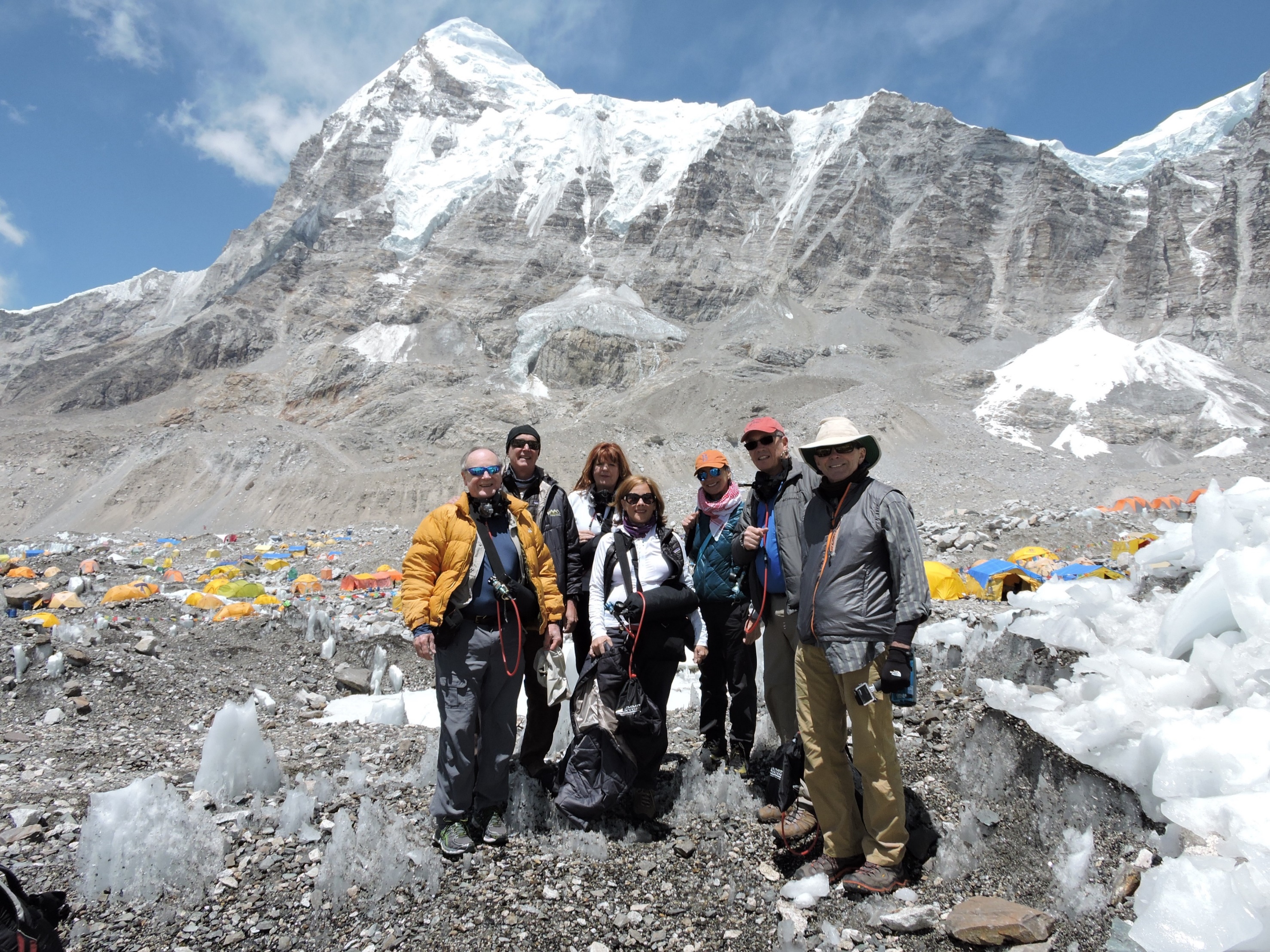 To orient ourselves, here’s a satellite photo. 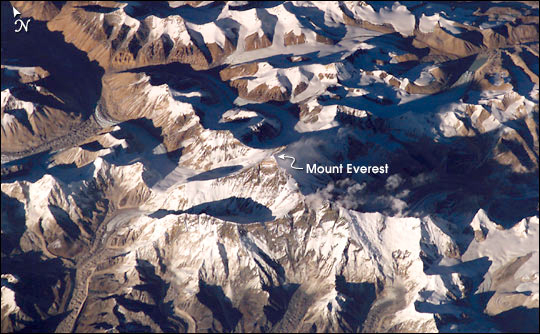 We are looking from Nepal into Chinese Tibet, with the sunny Southwest Face in Nepal, the shaded East or Kangshung Face in Tibet, the North Face and the Rongbuk glacier in partial shade in Tibet, the Lhotse-Nuptse Walls facing us in the sun all in Nepal, the shaded bowl between them and the Southwest Face is the Western Cwm.  Lhotse’s summit is above the apex of the bowl covered in a small cloud.

No trekker ever sees any of this as his view is blocked by the Lhotse-Nuptse Wall and Everest’s West Shoulder.  The only way for a non-climber to do so is with me!  We fly above the Ice Fall at 22,000 ft into the Western Cwm, with the entire Southwest Face of Everest on the left, Lhotse – the world’s 4th highest – straight ahead, and the north flank of Nuptse on the right.

It is a sight few people have ever seen, a sight that stays treasured within you for the rest of your life. 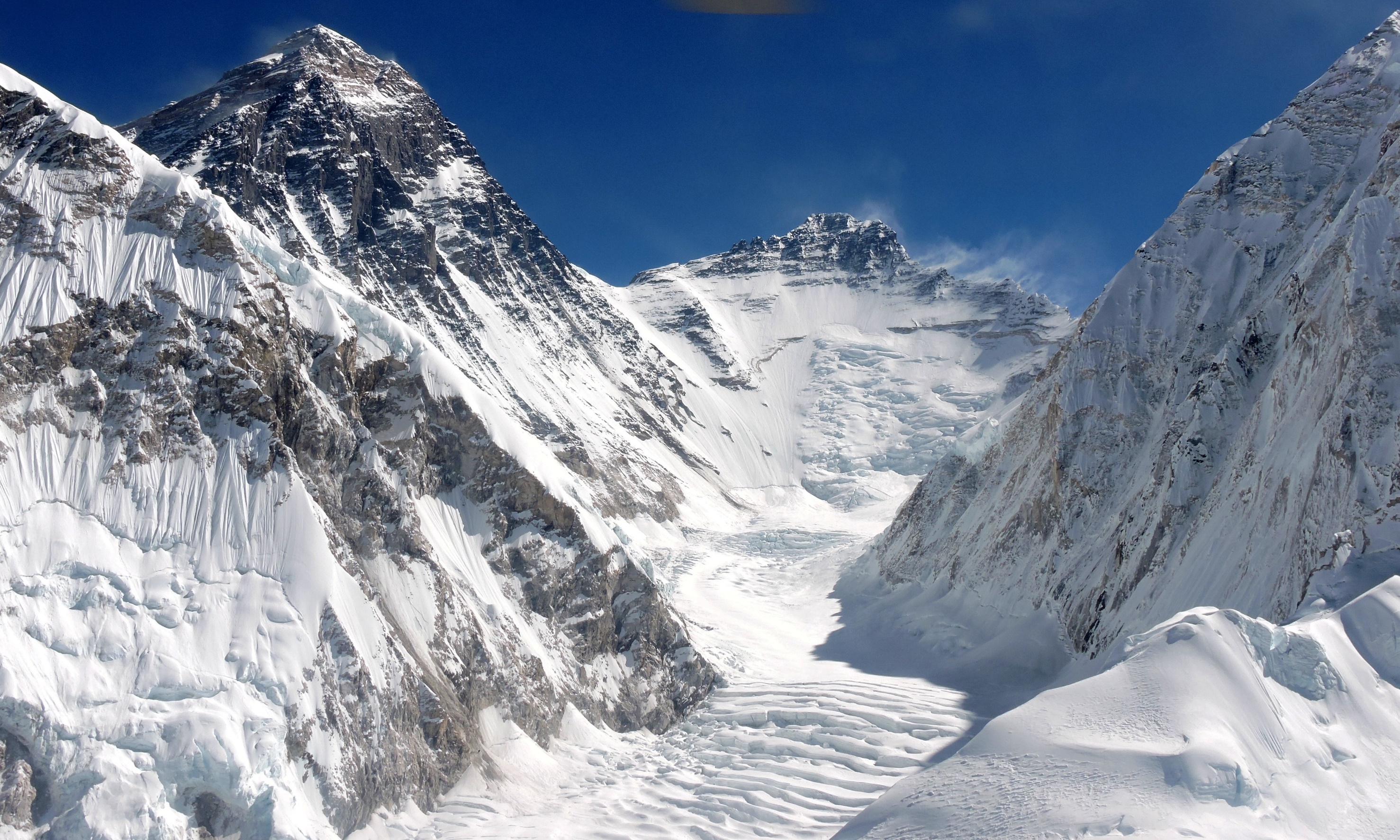 Exiting the Western Cwm over the Khumbu’s dogleg, we fly down the Khumbu Glacier to see Nupse on our left. 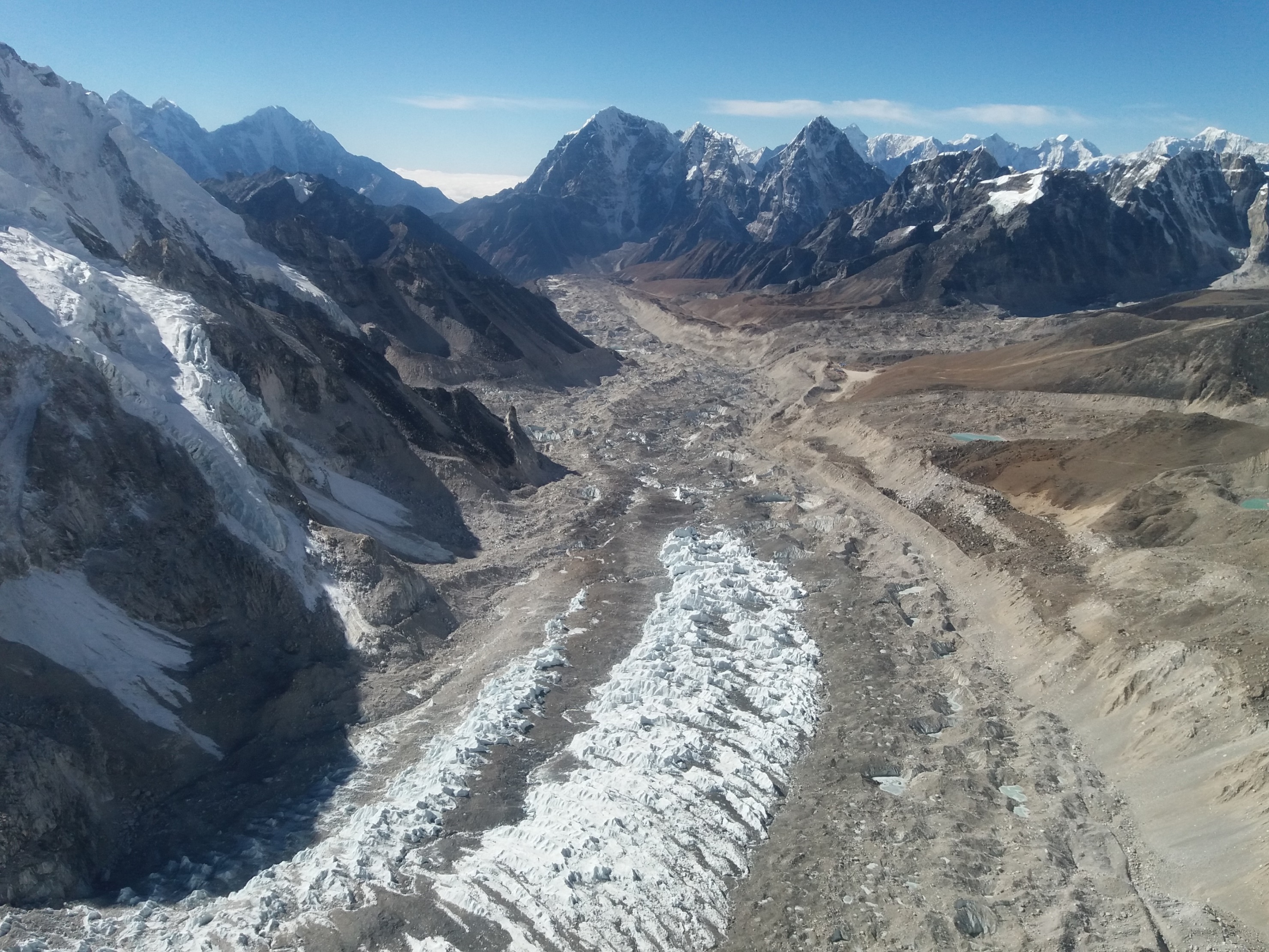 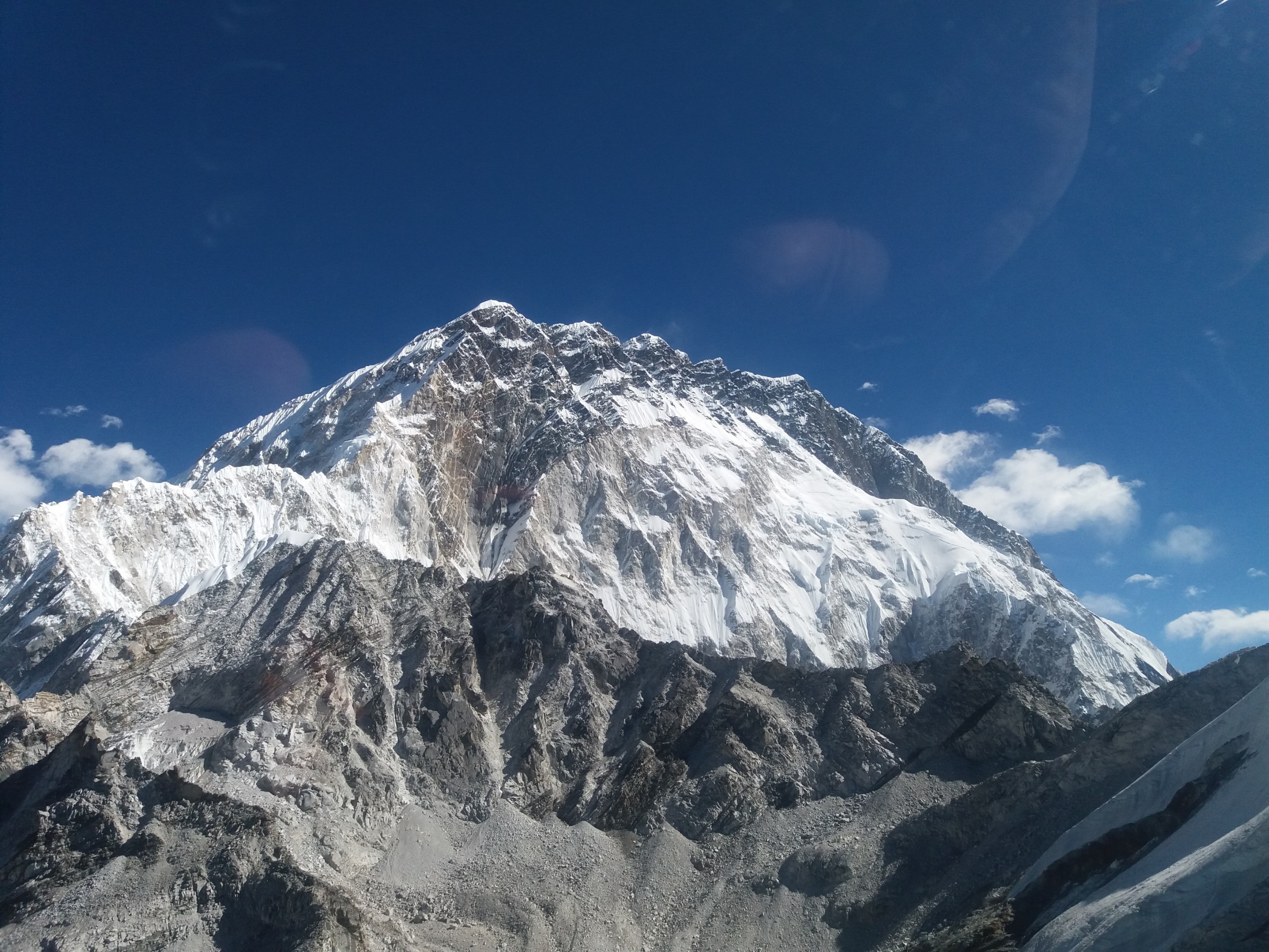 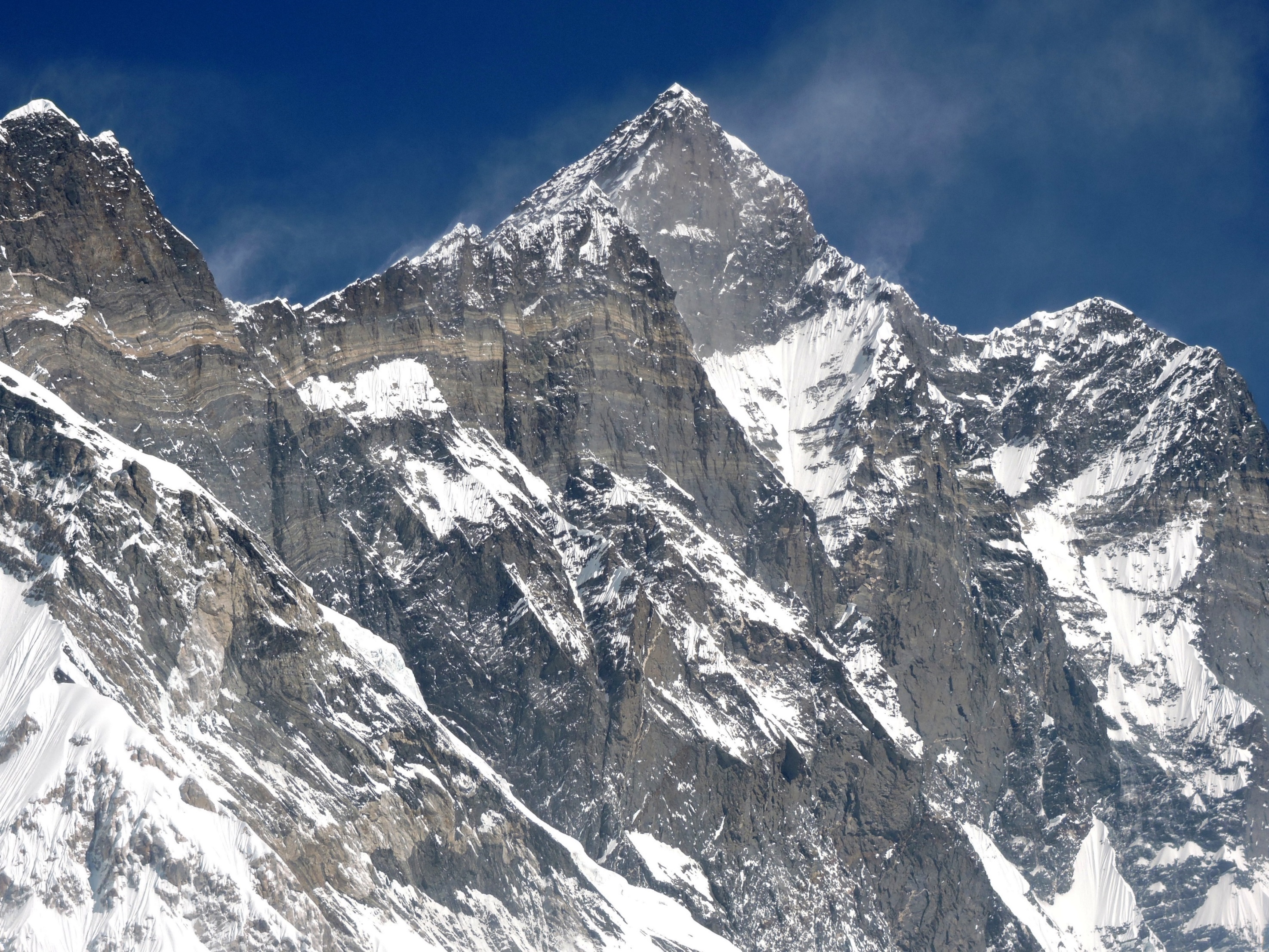 Our route ends with a landing at the Tengboche Monastery.  That’s Ama Dablam, the Matterhorn of the Himalayas, in the near distance, and the Lhotse-Nuptse Wall in the far, with the summit of Everest barely sticking out behind. 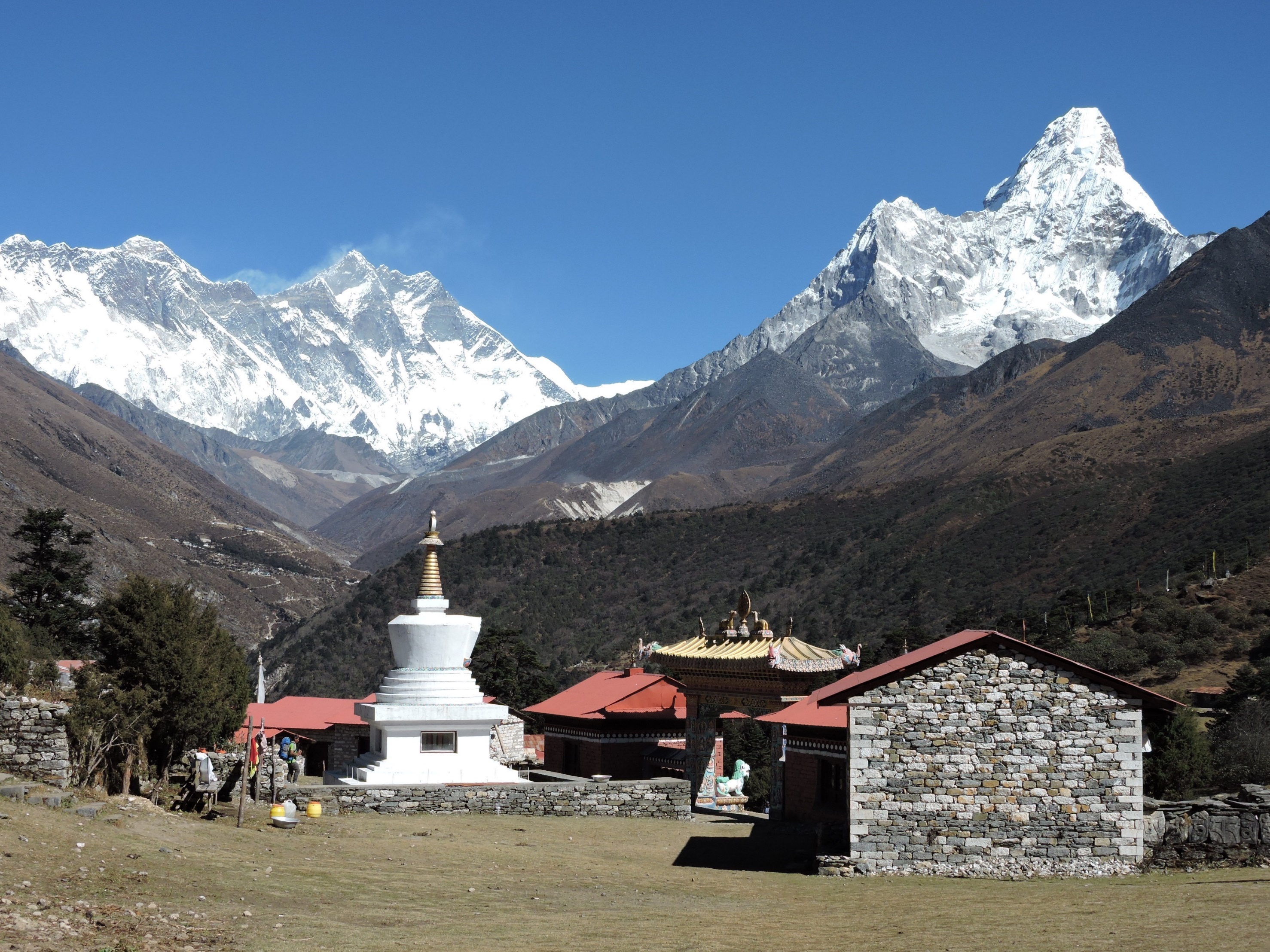 Believe it or not, that small distant view of Mount Everest is all a trekker, spending two weeks of extraordinary effort hiking to the base camp and back, ever sees of the world’s highest and most famous mountain on earth.   Here it is by telephoto. 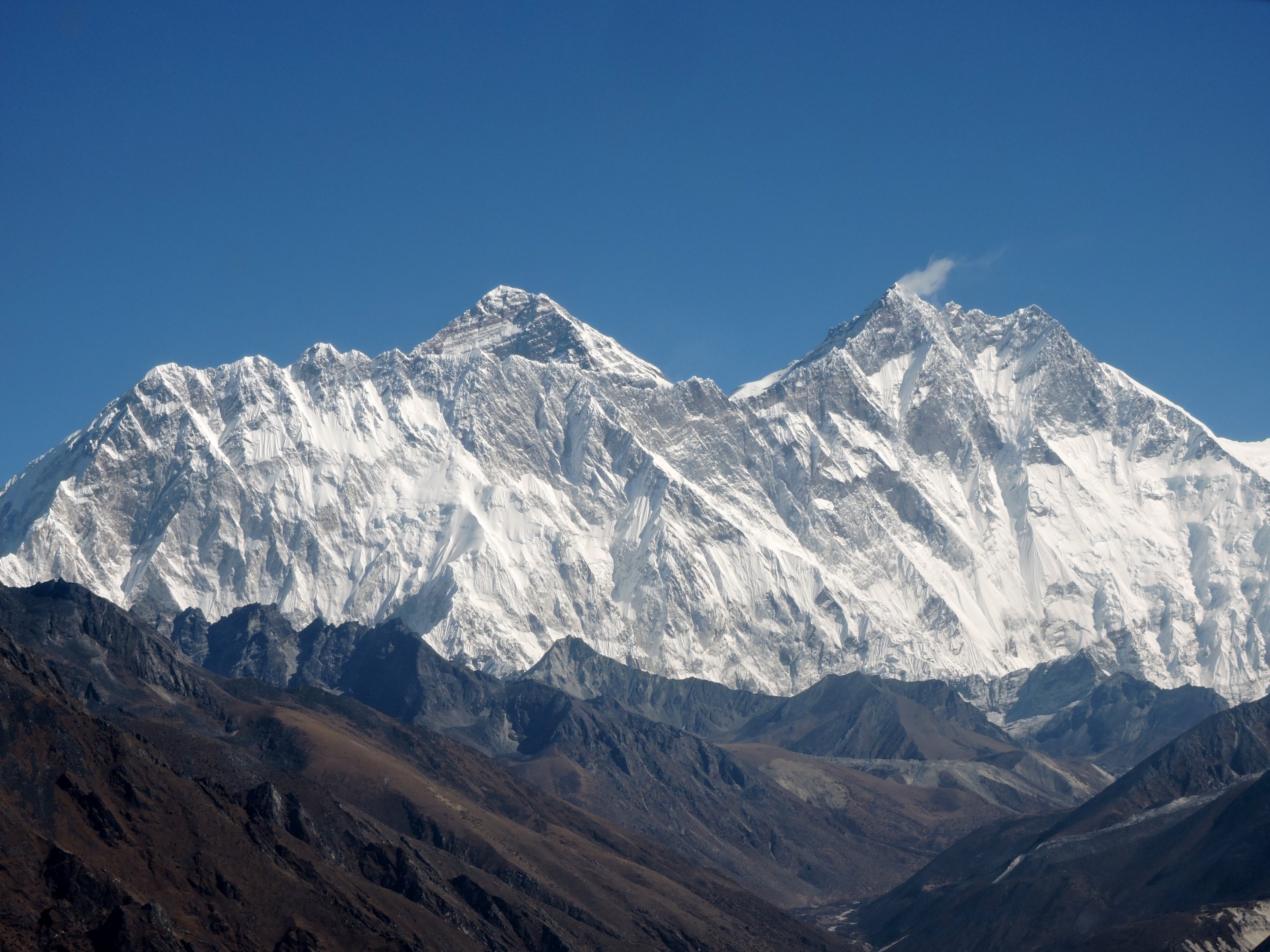 Tengboche is Tibetan Buddhist of the Nyingmapa (Red Hat) school, the original form of Tibetan Buddhism founded by Padmasambhava around 750 AD.  Being in the presence of Mount Everest is a spiritual experience for many.    It’s only appropriate we end our Route to Everest here. 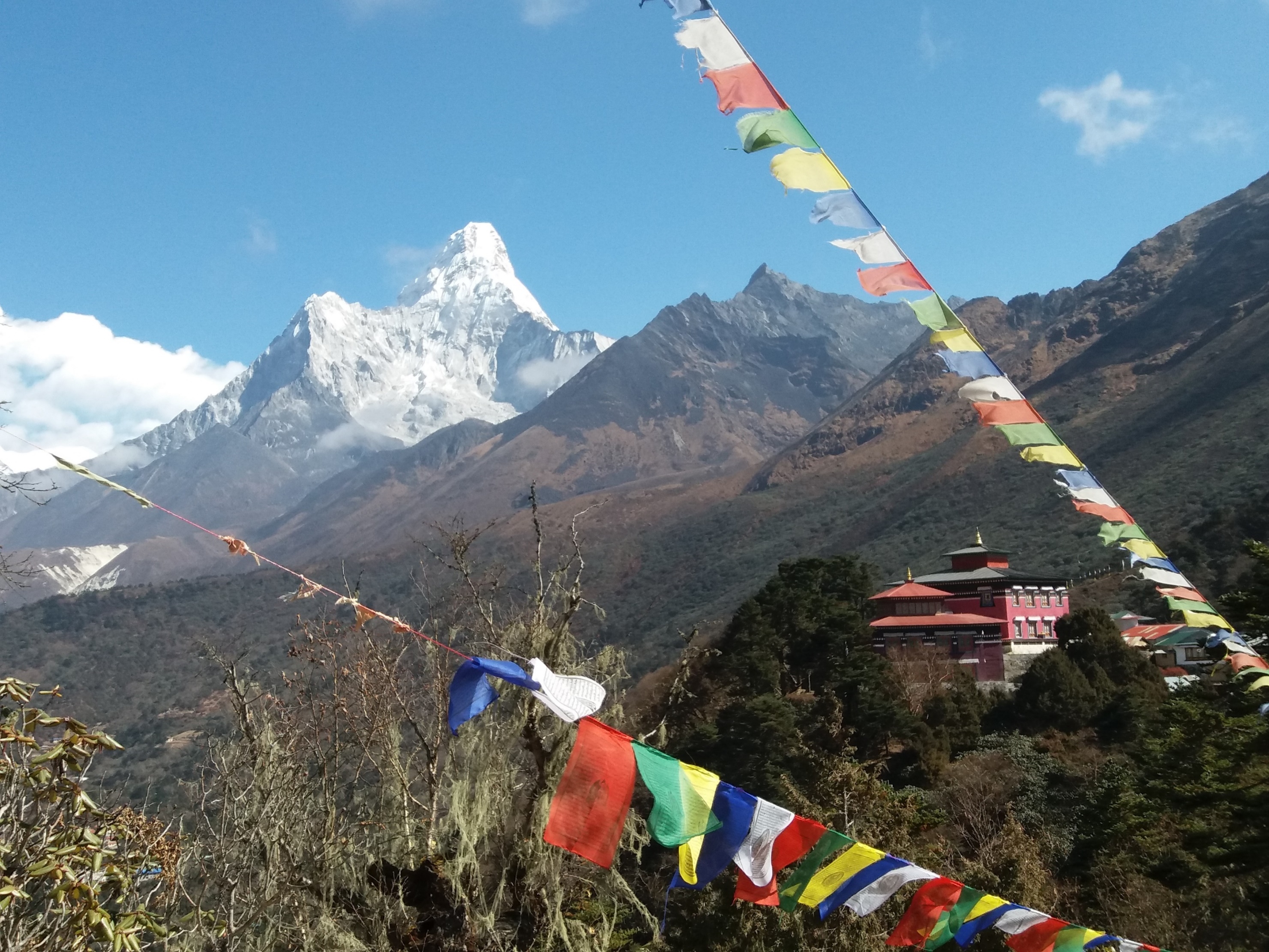 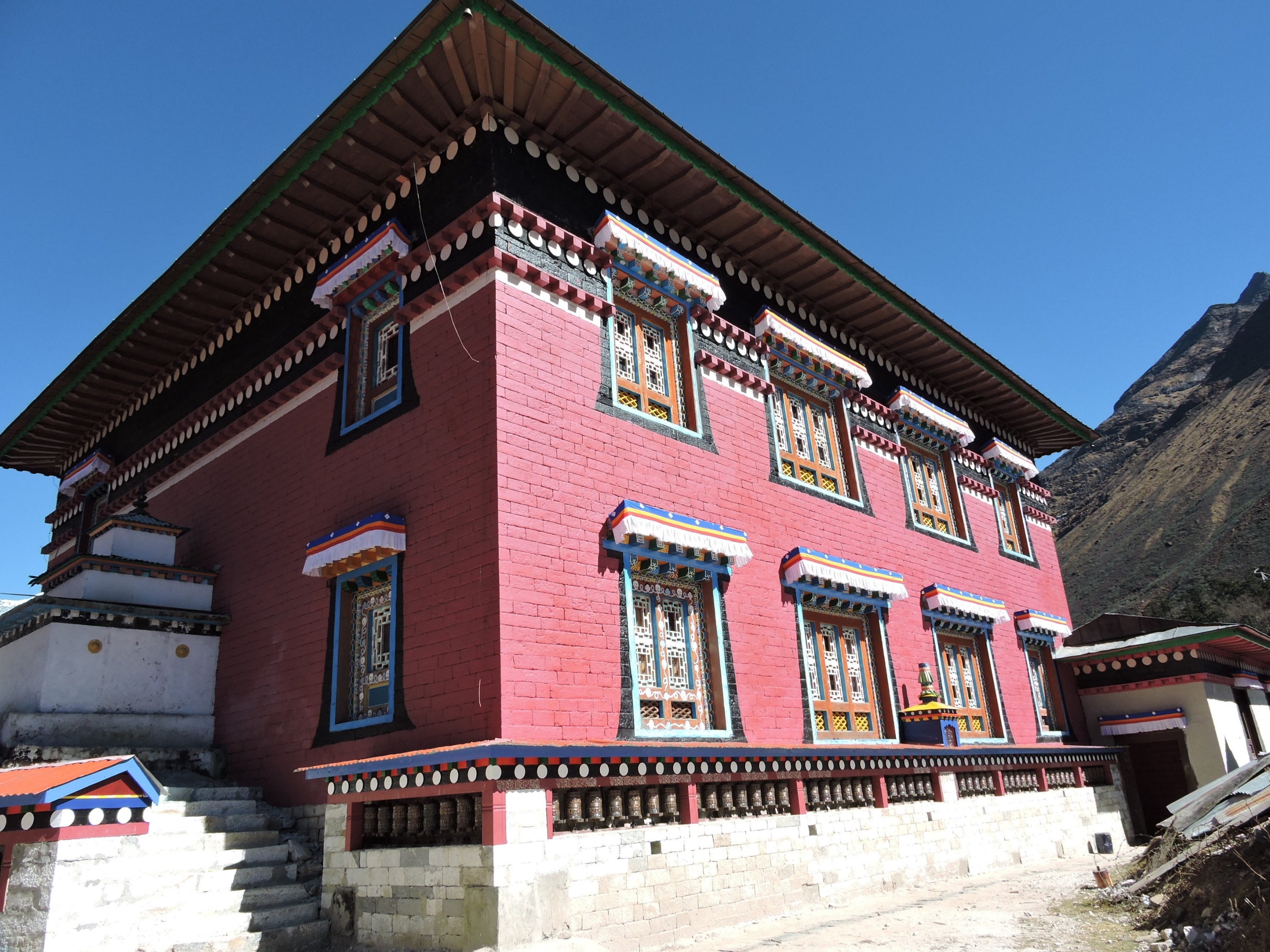 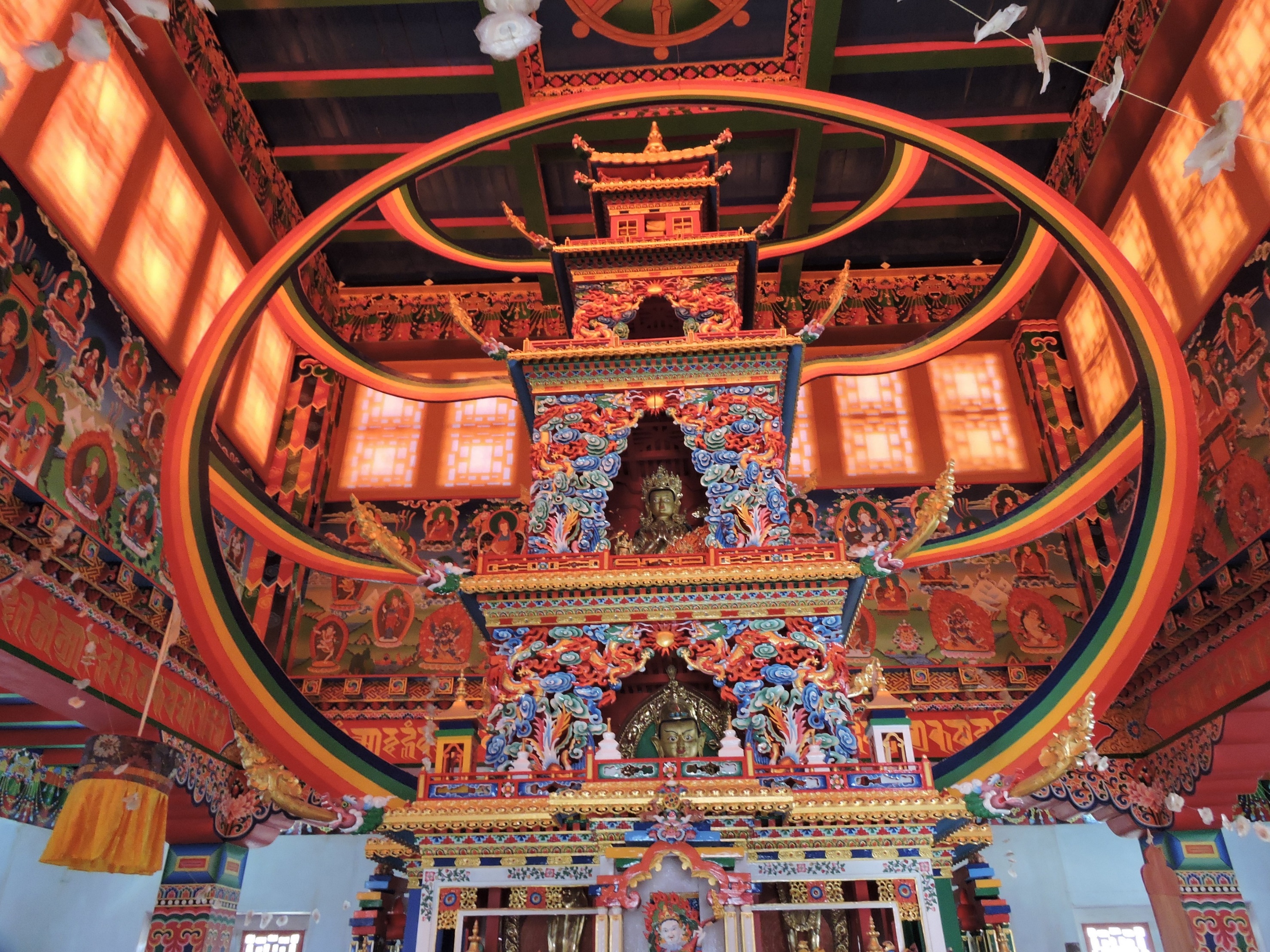 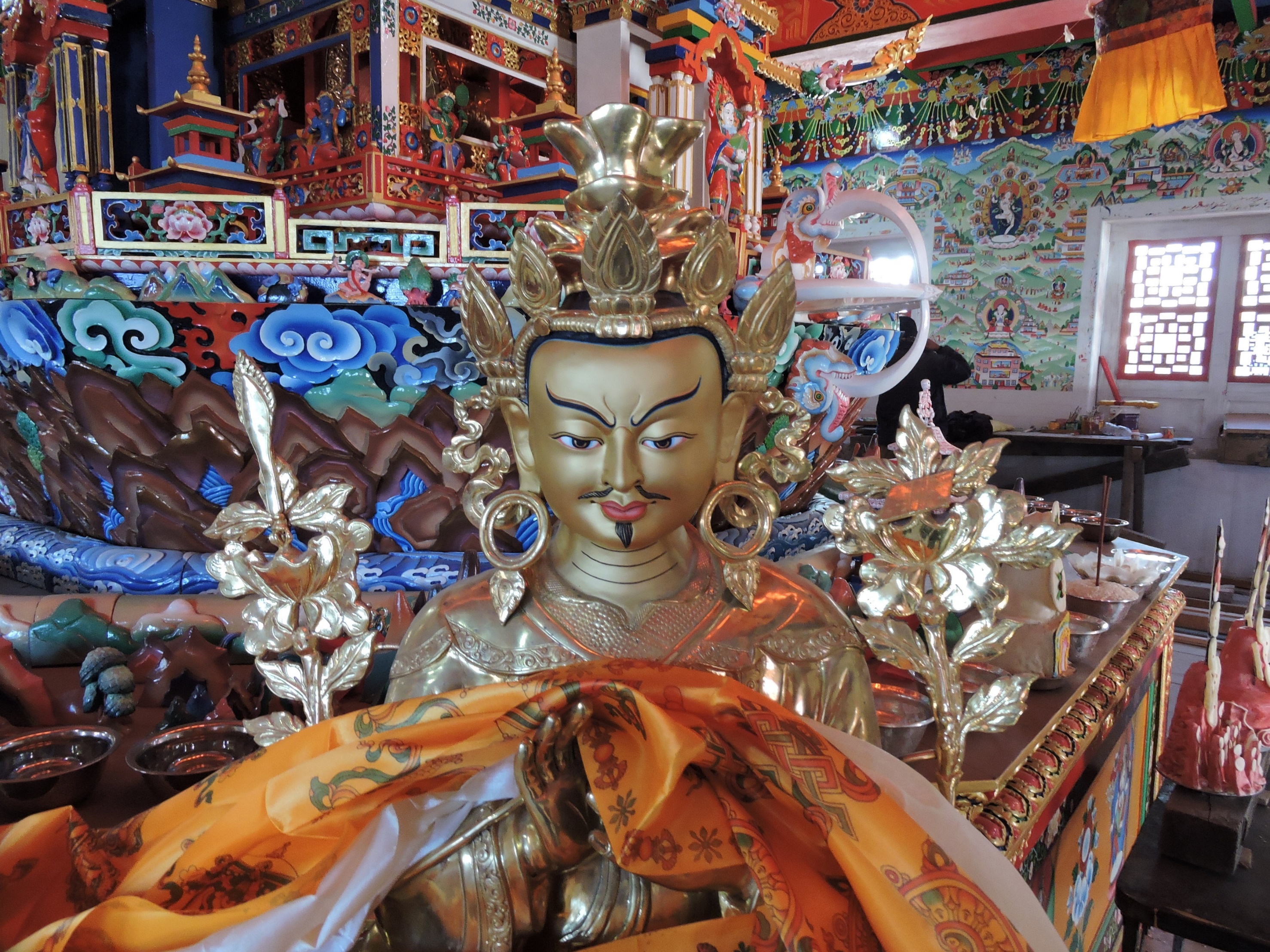 Next, we continue exploring the Himalaya’s greatest mountains with The Route to Makalu and Kanchenjunga.  If you want to explore the Himalayas for real with me, contact us for details.

Jack Wheeler is the Founder of Wheeler Expeditions