The Hidden Kingdom Of Lo

Lo Manthang, Kingdom of Lo, Upper Mustang, Nepal. In 1380, a Tibetan warrior Nyingma (Red Hat) lama named Amne Pal established his kingdom here beyond the Himalayas on the edge of the Tibetan Plateau. It hasn’t changed that much since and still exists today. 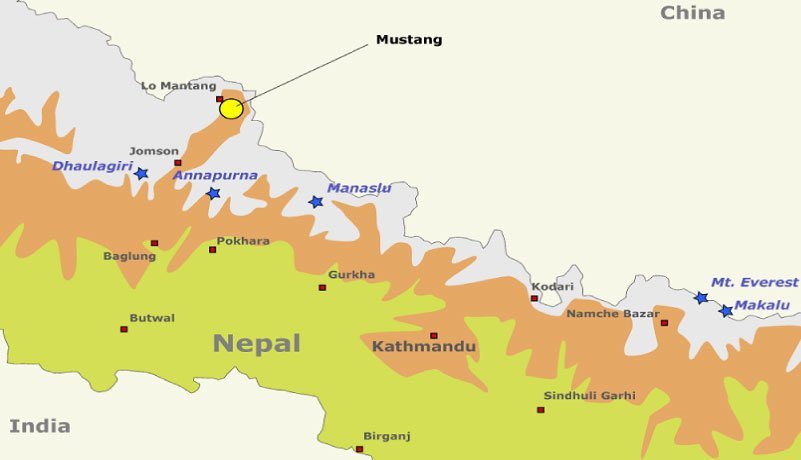 It is here you will find the last remaining place of pure Tibetan culture on earth. The people of Lo know full well that right across their border in Chinese-Occupied Tibet, the Chicoms have destroyed that culture. Tibet today is little more than a Tibetan theme park for Chinese tourists, tightly garrisoned by Chinese soldiers.

For a thousand years or more, Lo-pa Tibetans had been living in caves dug out of vertical cliffs in the region to be safe from bandits. Amne Pal got rid of the bandits and invited them to live in his kingdom’s capital of Lo Manthang – which is now recognized as a UN World Heritage Site as “best preserved medieval walled city on earth.” 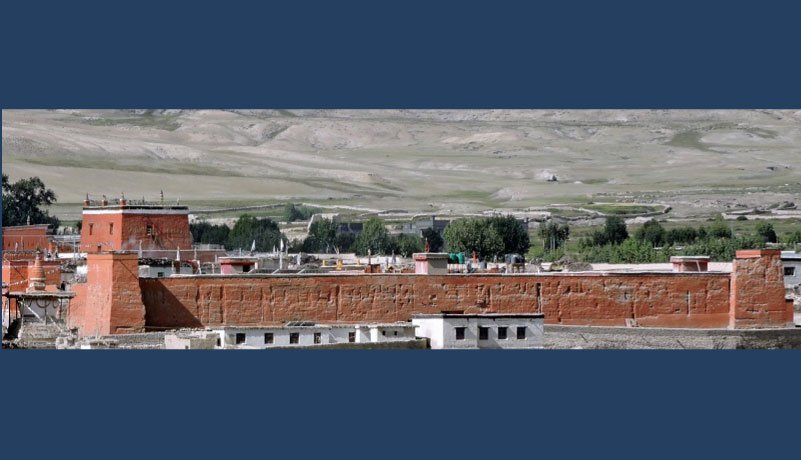 The kingdom thrived as it was athwart a caravan route bringing salt from Tibet to India, for it lies at the source of a river older than the Himalayas: the Kali Gandaki.

About 50 million years ago, the Indian Plate floating north crashed into the Asian mainland, driving underneath it and buckling the mainland edge like crinkled paper to create the Himalayas. This process continues with the Himalayas rising an average of 2/10ths of an inch per year today.

The Kala Gandaki kept right on flowing through the uplift, cutting a gorge straight through the Himalayas. It is, in fact, the deepest gorge in the world – for on the west side is the 7th highest mountain in the world, Dhaulagiri, at 8,167 m/26,795 ft: 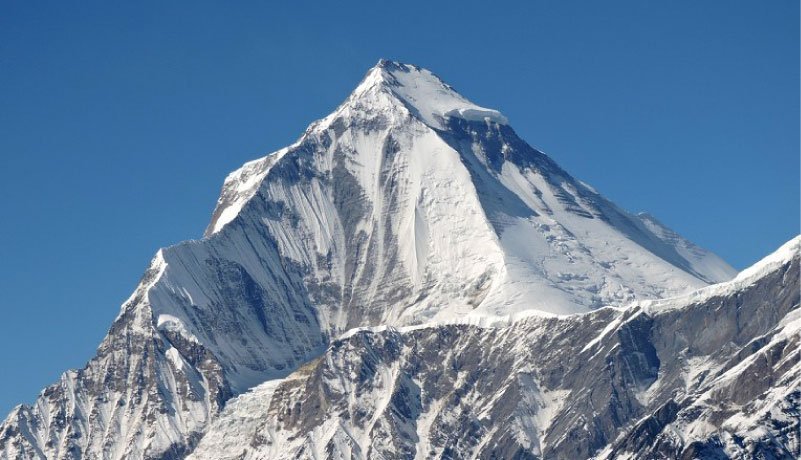 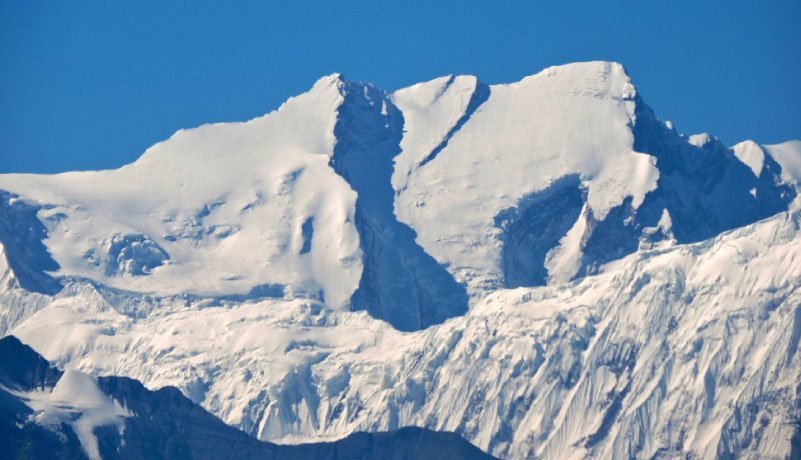 The Lo-pa Tibetans practice the original form of Tibetan Buddhism, Nyingma, or Red Hat, founded by the legendary Padmasambhava around 800 AD as a synthesis of the animist religion of early Tibetans, Bon, with Mystic or Tantric Buddhism.

This continued until 2008, when Communists seized power in Kathmandu and sent a letter to the King (Gyelpo) of Lo, Jigme Dorje Palbar Bista, the 25th Gyelpo directly descended from Amne Pal, that he was no longer king and Lo was no longer independent.

In the small square in front of the Royal Palace (built in the early 1400s), the letter was read aloud to a huge crowd of Lo-pa. The King asked the people what to do. They shouted, “Burn the letter!” This is exactly what was done, to the wildly cheering applause of Lo Manthang’s entire population.

That was 10 years ago, and the people of Lo consider themselves just as sovereign as ever – and just as remote. Just about the only way to get here is to walk – a two-week trek over rough terrain at an altitude of over two miles high. There is a 4WD track that can cut that to one week, at the cost of the most bone-jarring ride you’ve ever had in your life – as I know from personal experience. Sections of it can be interesting: 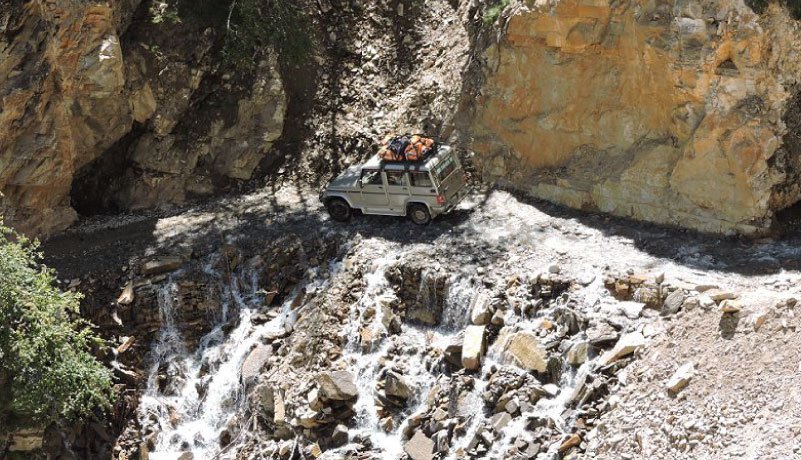 Yet, getting here is worth it – for while everyone of adventurous spirit wants to see Tibet, this is the only place left where the Real Tibet still exists.

The vistas are glorious, dotted with sacred chortens and fields of buckwheat in bloom… 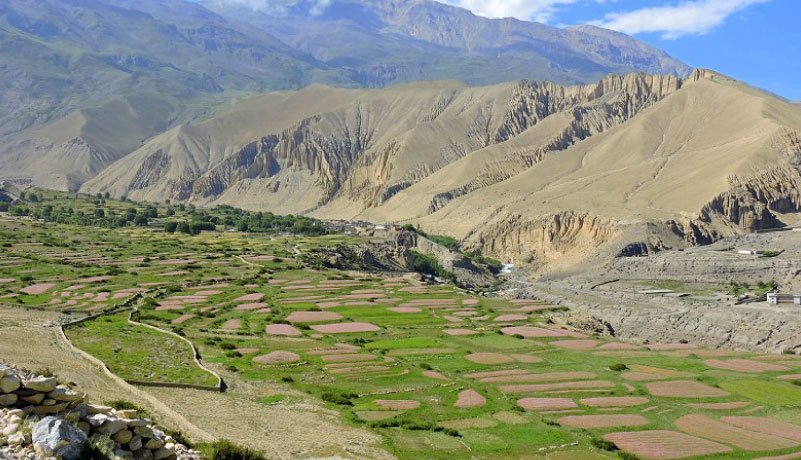 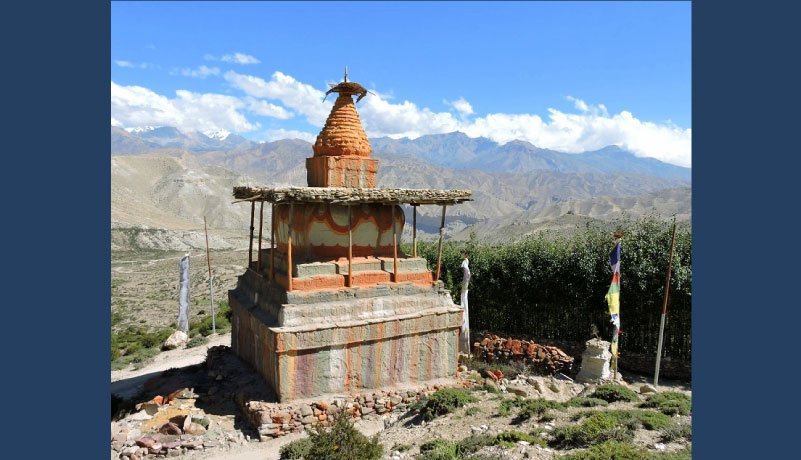 Lo-pa life revolves around their religion, and thus their gompas or monasteries are the focus of their culture. 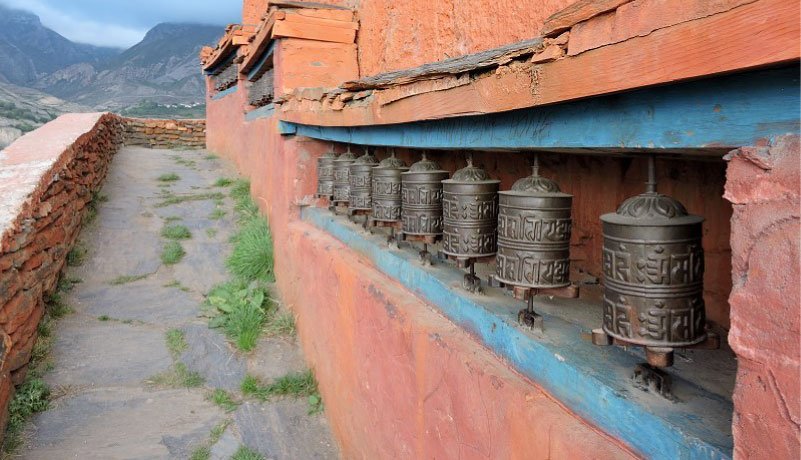 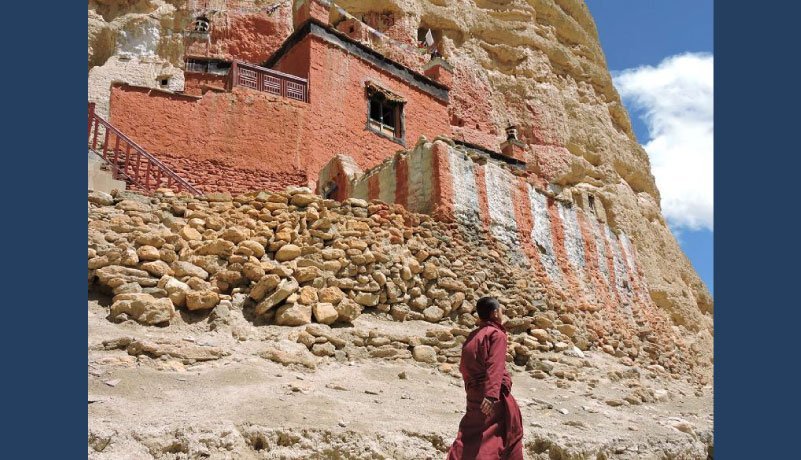 Their ceremonies are sacred to them… 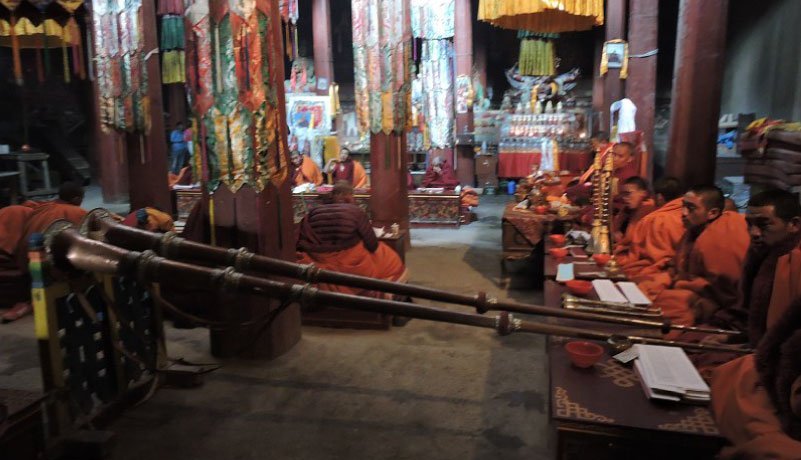 And so is their art. Bear in mind it is Tantric. Tantric Buddhism considers the goal of sex to be a religious experience. So it is, you will see Tibetan gods and goddesses depicted on the gompa interior walls in sacred embrace… 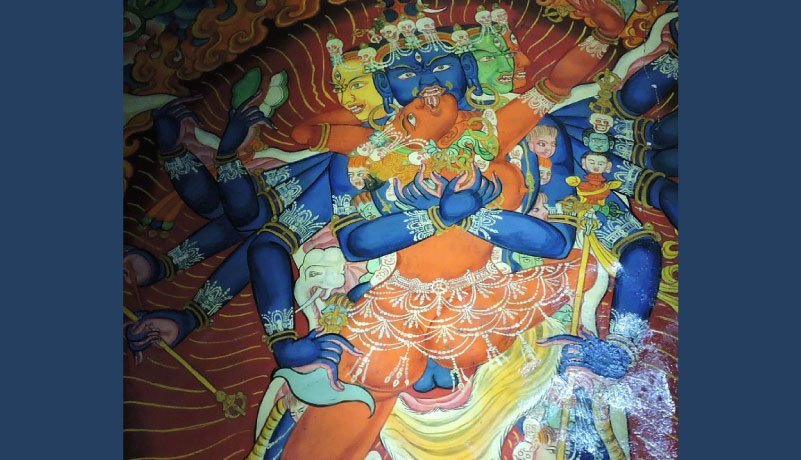 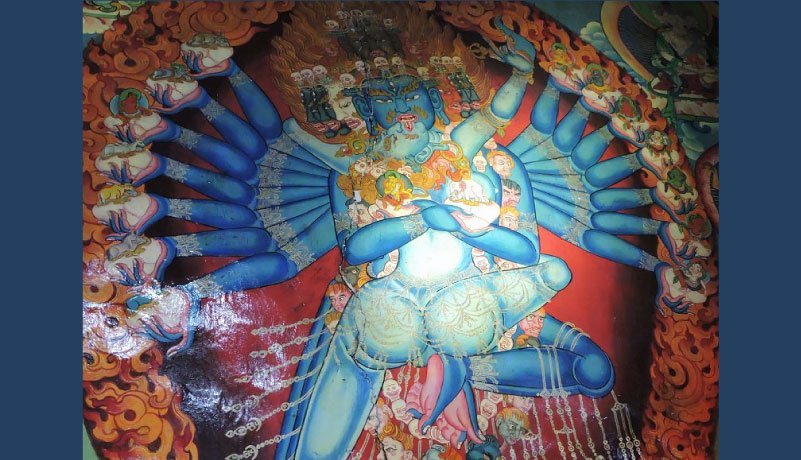 The most sacred event in the lives of the Lo-pa Tibetans is the Tiji – Chasing of the Demons in a series of sacred dances by the lamas to spiritually protect people. Anyone who sees it never forgets it… 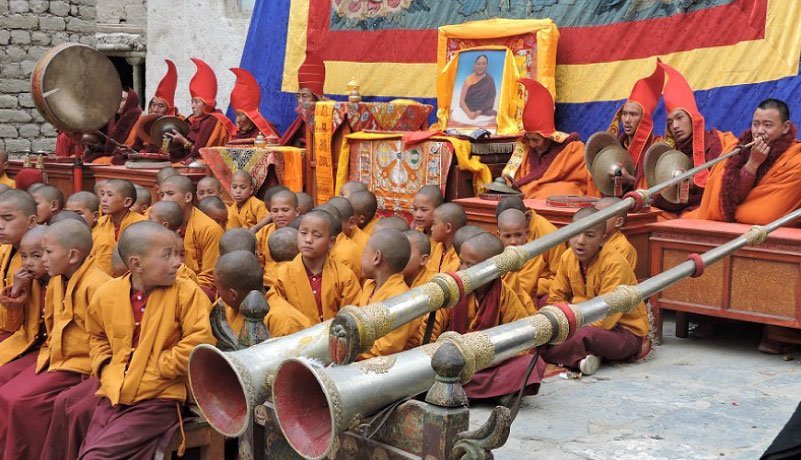 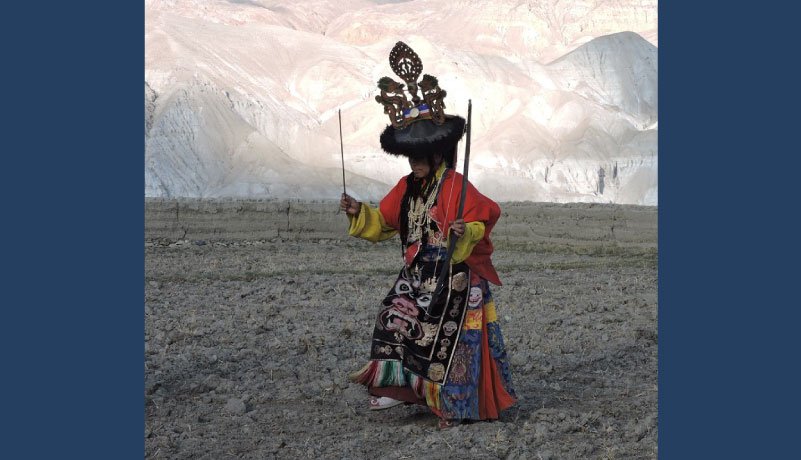 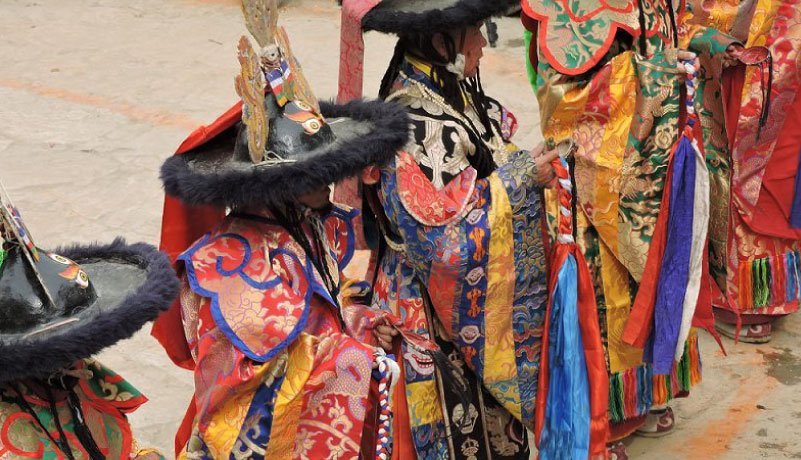 There is, however, one other way to get here rather than hike for two weeks or bounce your guts out in a jeep for one – for we come to the Kingdom of Lo on our Himalaya Helicopter Expedition.

You may recall reading about it late last summer:  To Everest and Beyond. That was about our 4th HHE in November. Our 5th is this coming May. It is simply the greatest adventure to have in the world today.

We land at the base camps of all 8 of the highest mountains in the Himalayas, including Everest – actually much more than that, for we fly into the Western Cwm of Everest above the Khumbu Ice Fall at 23,000 feet, far above the base camp.

Here you see the entire Southwest Face of Everest from summit to bottom on the left, plus Lhotse straight ahead, the world’s 4th highest mountain at 8,516 m/27,940 ft: 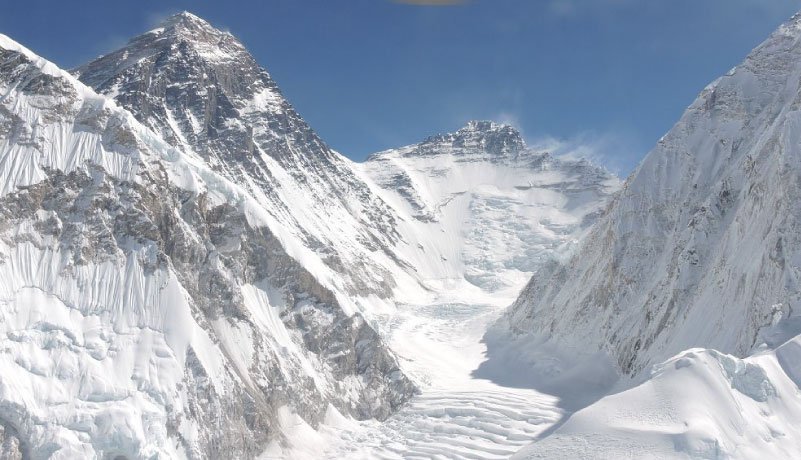 This is a completely unique view of Everest seen only by high altitude mountain rescue helicopter. Here we are at the Dhaulagiri Base Camp: 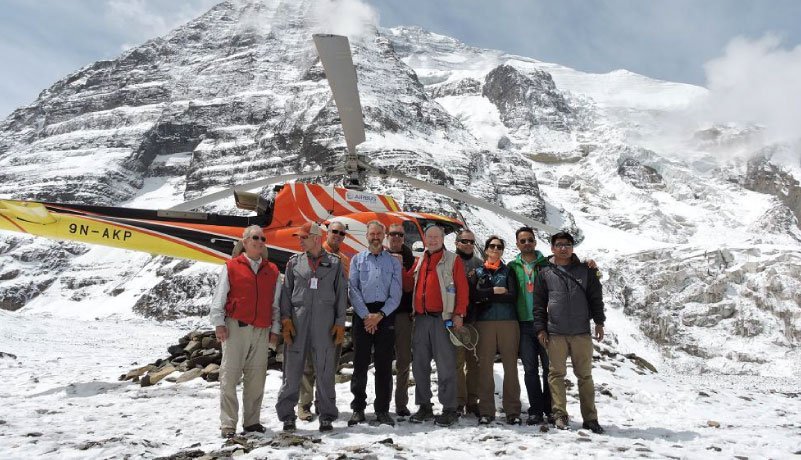 Just as it takes weeks to trek to Everest, Annapurna, Dhaulagiri, or Mustang, our time to get to each is measured in minutes. Oh, yes – since Mustang is in a restricted area bordering Chinese Tibet, it takes special permission to fly a helicopter there – which we have.

Experiencing the Hidden Kingdom of Lo – and all eight of the highest giants of the Himalayas – is Ultimate Escape Artistry. Let me know if you’d like to make it an indelible part of your life. 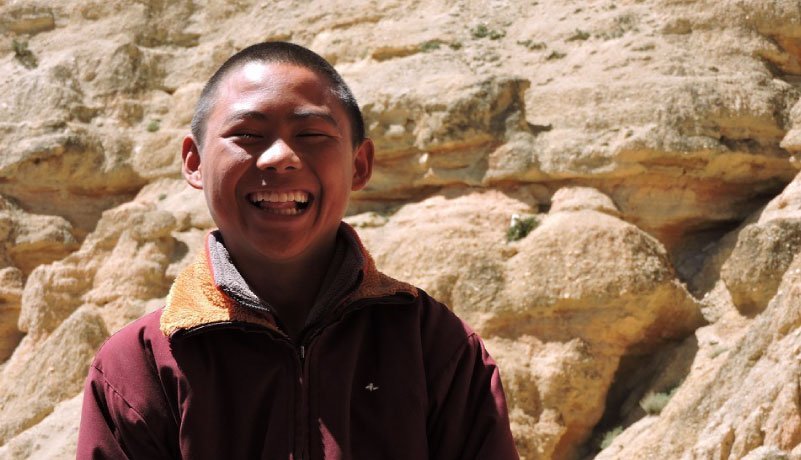 Let me know at Jack@Wheelerexpeditions.com. Or for more info: Himalaya Helicopter Expedition.