Both my wife, Rebel, and I grew up in California, so we know it when we see it – and we recognized it right away in Portugal.

Then, of course, there’s the great wine and great food.  There are even castles in the sky as you see above, similar to Hearst Castle south of California’s Big Sur.

Of course, there are differences.  California’s history is as recent as Portugal’s is ancient.  People have been living there before they were people.  That is, the European version of Homo ergaster – Homo neanderthalensis or Neanderthals – lived along Portugal’s coast for over 100,000 years.  The European version of us (Homo sapiens) – Cro-Magnon man – moved in about 40,000 years ago. 10,000 years later, the Neanderthals were extinct.

The Cro-Magnon hunter-gatherers survived the last Ice Age and flourished for millennia until Indo-European folks we call Celts showed up some 4,000 years ago.  Tribes emerged, the largest of which were the Romans – when they showed up 2,000 years later – called Lusitani.  The most famous chief of the Lusitani was Viriathus, who inflicted defeat after defeat upon the invading Romans until they killed him in 139 BC.

To this day, Viriathus remains Portugal’s national hero.  The Portuguese consider themselves descendants of the Lusitani, and they often use the Roman name of Portugal, Lusitania, as an alternate name for their country.

Nonetheless, Portugal is named after a Roman conqueror.  Decimus Junius Brutus Callaicus (180-113 BC) was the general who subjected the Lusitanians and another people to the north, the Callaeci, to Roman rule after Viriathus’ death.  In 136, the Roman Senate awarded him the title of “Callaicus” for his victories – and named the town he fortified at the mouth of the Douro river Portus Cale, the Gate of Callaicus, in his honor.

After the Roman Empire’s fall, a Germanic people, the Visigoths, established their rule in the early 400s, and called it Portucale.  The Visigoths became Christians, but were overrun by the Moslem invasion of Iberia (Spain and Portugal) from Africa in 711.

The Reconquering of Portugal – as Portucale was pronounced in the Middle Ages – was heroic.  It began with a nobleman, Afonso Henriques (1109-1185), who waged forty-six years of war against Moslem armies – starting with his victory in the Battle of Ourique in 1139, after which his people declared him King of the Portuguese.

After 40 years of such victories, in 1179 Pope Alexander III recognized Portugal as a sovereign Christian nation and Afonso the Great as its rightful king.  To this day, the Portuguese call him O Fundador – The Founder who created their nation as a Christian hero.  Here he is: 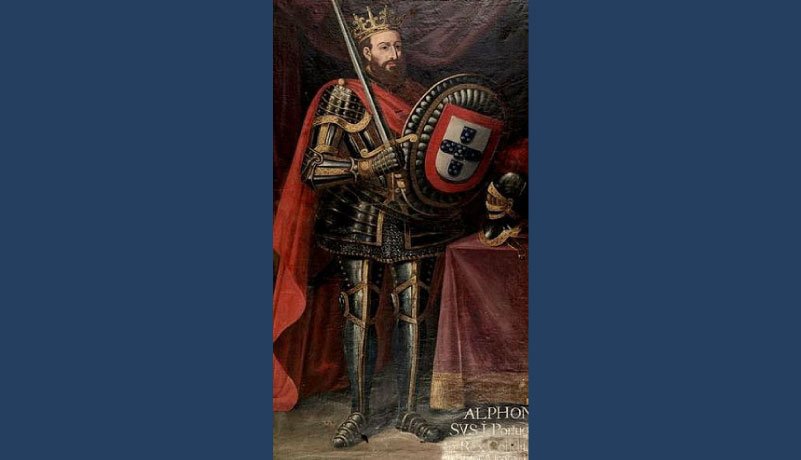 In 1386, Portugal established the oldest diplomatic alliance still in effect in the world today, the Treaty of Windsor.  Friendship between the British and the Portuguese is well over 600 years old.

It was in the 1400s that Portugal launched Western Civilization’s Age of Discovery and became a world power – so powerful that it signed the Treaty of Tordesillas in 1494 with Spain, dividing up the entire “Non-Christian” world between them.

All in all, the Portuguese Empire was the first fully global empire in history, the first and longest-lasting of all European empires – from Ceuta on the Moroccan coast in 1415 to East Timor in 2002 – and was composed of an astounding 53 current sovereign nations.

Today, Portugal is booming because it has everything.  Fabulous climate, beaches, food, wine, history, charm up the yin-yang, and the sweetest, nicest people in Europe.  That’s what my wife loves about the place.  Scenery and history is wonderful, but what really counts for her are people.

The Portuguese have a gentle humility that’s captivating – they’re farmers and fishermen and small businessmen.  They love their families – you often see three generations: kids, parents, and grandparents enjoying a day together.  Their kids are amazingly well-behaved and nice.  They are Christians where all people are welcomed.  The churches are astounding – like the World Heritage Sites of Batalha, of Alcobaça, of Tomar, and of course, one of Europe’s great pilgrimage sites, the Shrine of Fatima.

One of the more interesting things about Portugal is how much it’s off the radar scope.  It stayed out of both World War I and II.  Recall the plot of Casablanca, with Ilsa (Ingrid Bergman) and Victor desperate to get the “letters of transit” that Rick (Bogart) has, and the famous scene at the end with Rick telling Ilsa to get on the plane with the letters.  Where was the plane flying to?  Lisbon, Portugal.

Lisbon is the oldest city in Western Europe, founded by the Phoenicians as Allis Ubbo  (Safe Harbor) over three thousand years ago (1200 BC).  There is so much history and charm here it’s overwhelming.  It’s a city of cable cars… 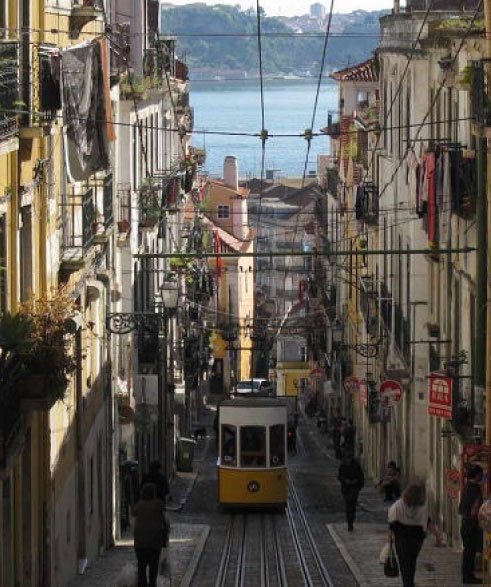 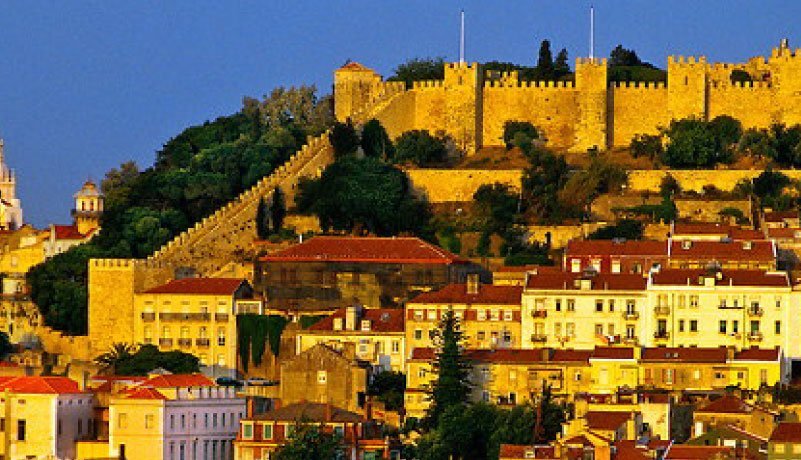 Of enjoying a glass of wine at open-air cafés… 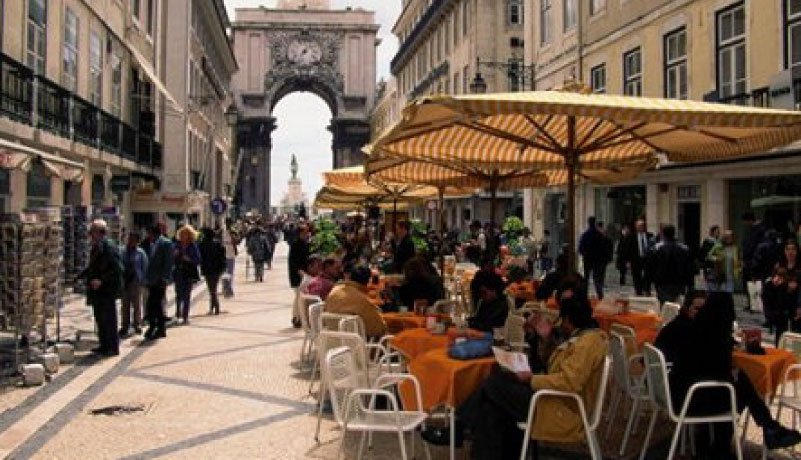 Underneath you on the Rua da Prata there’s an excavated 2,000-year-old Roman street, with shops and cafés just like above it.  I told you Lisbon was old, over a thousand years older than this Roman street.

Just down the Tagus River is Belém and the World Heritage Site of the Monastery of Jerónimos and the Torre de Belém.

The Torre or Tower of Belém is the landmark of Portugal, built in the early 1500s at the height of Portugal’s great Age of Exploration.

It’s across from the Jerónimos Monastery, one of the most magnificent buildings in Europe and housing the tomb of Portugal’s greatest explorer, Vasco da Gama.  It is a solemn moment to be in the presence of such epic history. 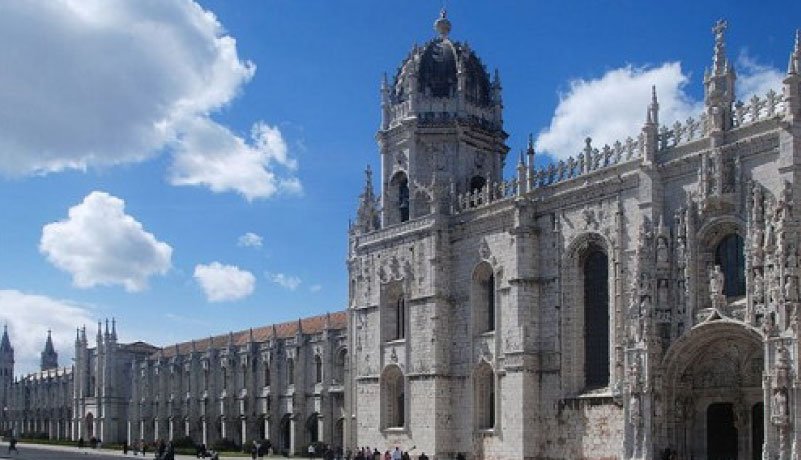 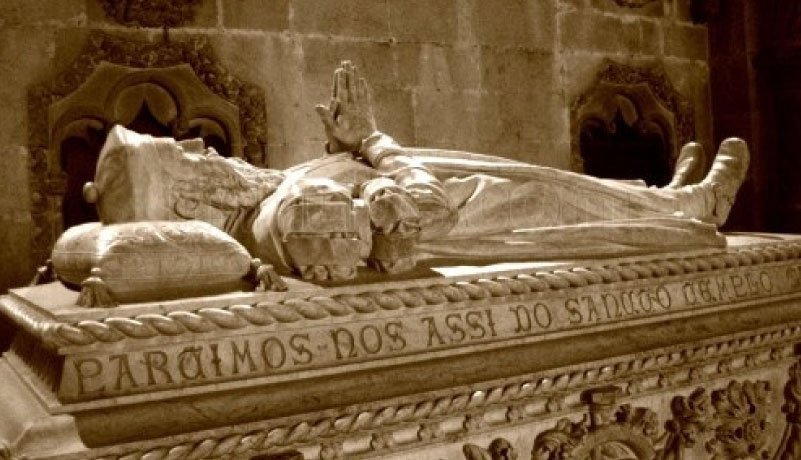 Continuing along the Tagus where it meets the Atlantic brings you to the Portuguese Riviera, which is nothing short of nirvana fabulous.

Cascais is Portugal at its most charming and captivating, with picture postcard scenes everywhere: 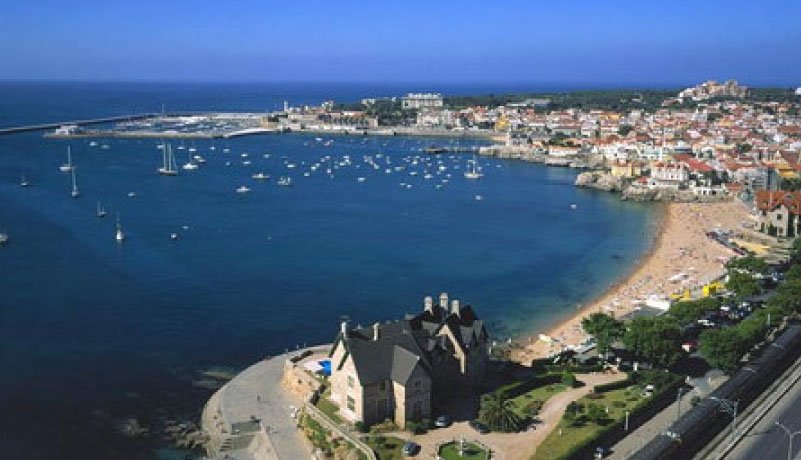 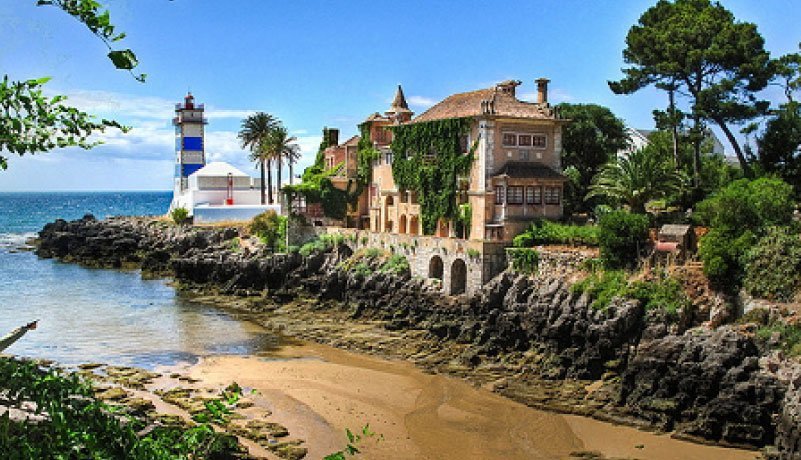 It’s teeming with cool and quaint little shops and stores, and pocket beaches along the Cascais-Estoril Promenade: 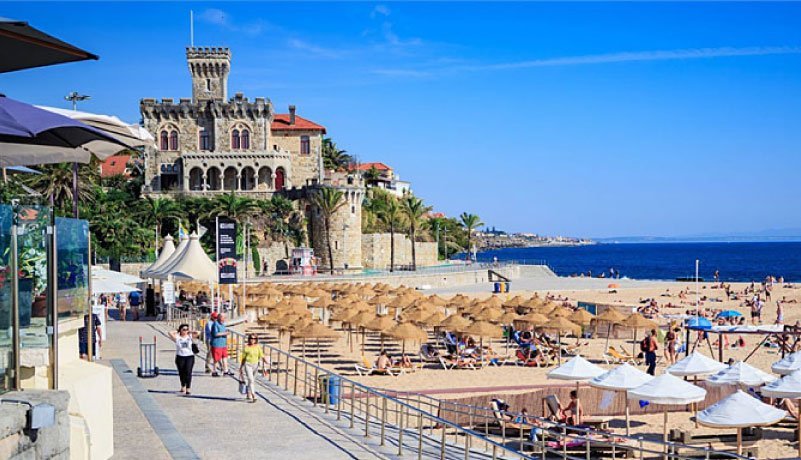 My favorite spot in Cascais is O’Luain’s Irish Pub, where you can get the best  pint of Guinness this side of Dublin.

Keep going and you come to Cabo da Roca, the westernmost point of land in Europe… 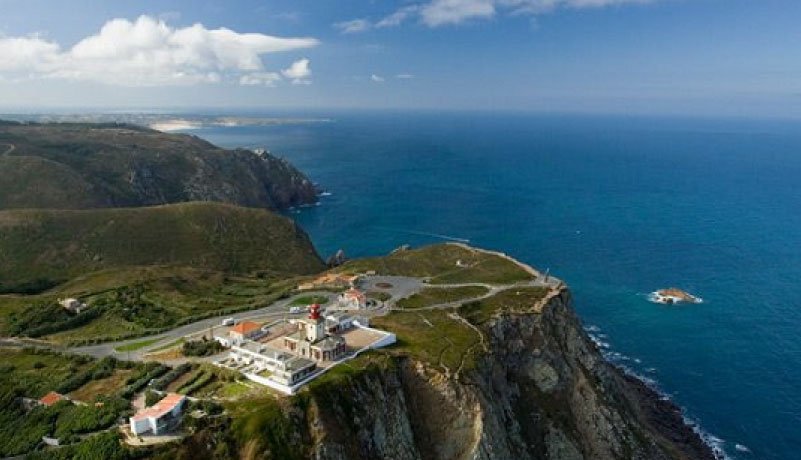 And then you come to Sintra to see why it is so justifiably world famous.

First stop is the Palacio de Monserrate.  I’m a fan of it not only because of its incredible architecture and gardens, but that it was created and built by a capitalist with money he earned himself – Francis Cook, a 19th century English businessman – not some king or “royalty” with money stolen from the peasantry.  It is uniquely captivating: 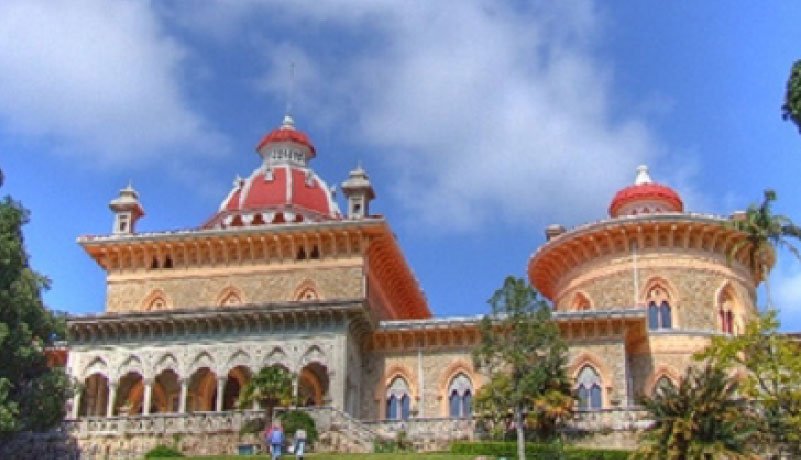 Next is the Quinta de Regaleira.  It is just as astounding as Monserrate – and it was also created and built with capitalist money of a Brazilian-Portuguese merchant, Antonio Monteiro.  The massive home is fabulous, but it is the gardens that will take your breath away, with its secret grottoes, waterfall lake, and mysterious Initiation Well. 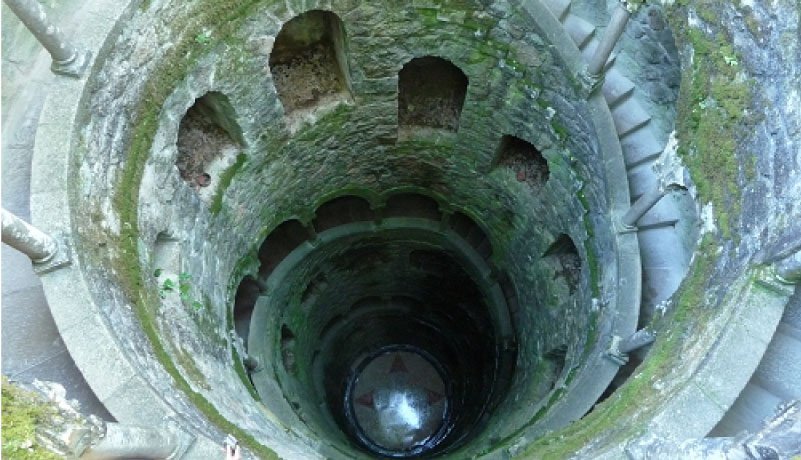 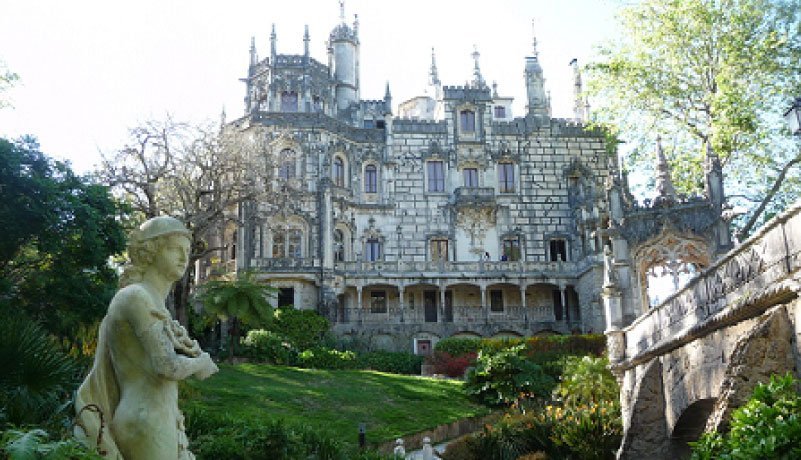 You’ll have to tear yourself away, but you simply have to witness one of Europe’s most astonishingly spectacular castles, the magical fairytale Pena Palace perched on a peak overlooking an incredible vista. 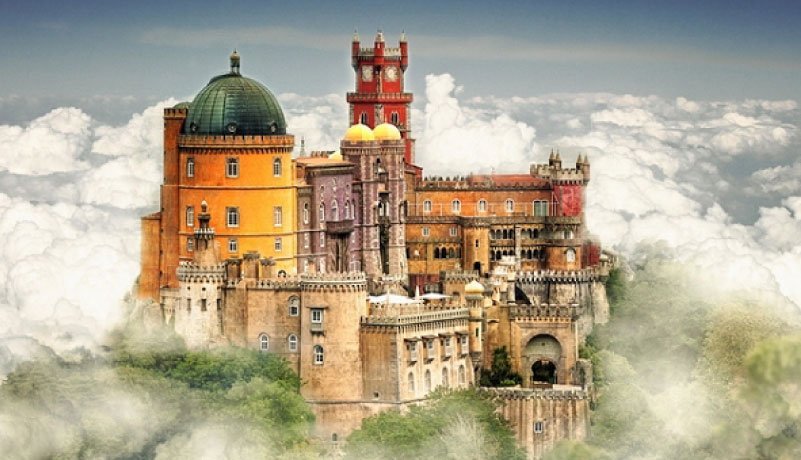 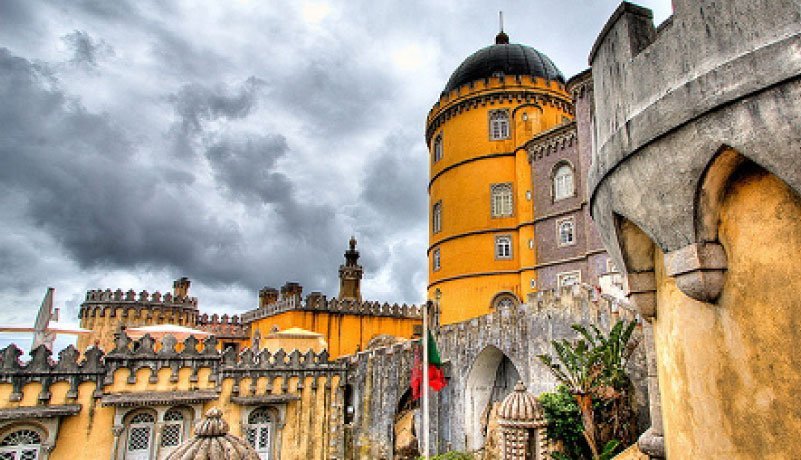 Just below it is the Castle of the Moors first built in the 8th century and captured by the Christian knights of Afonso Henriques in 1147.  Notice Pena Palace in the background… 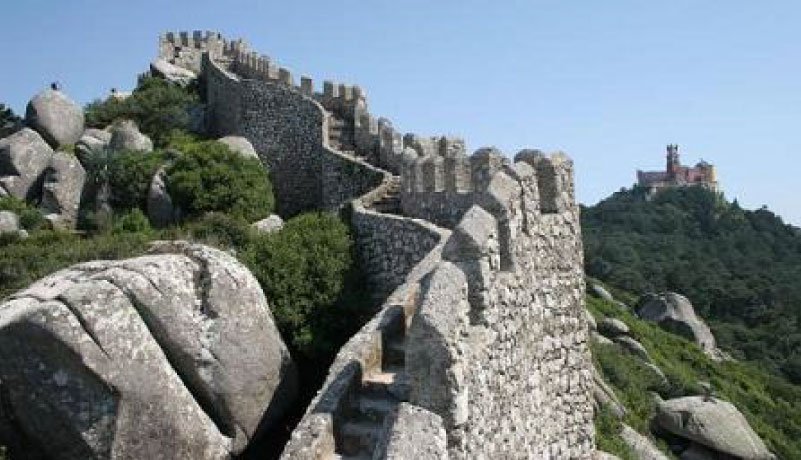 And then descend to the famous Lawrence’s Hotel for afternoon tea.  This is where Lord Byron stayed in 1809 to write his poem Childe Harold’s Pilgrimage, in which he praised Sintra as a “glorious Eden… palaces and gardens rising in the midst of rocks, cataracts and precipices; convents on stupendous heights.”

But you must return to the heart of Lisbon by evening.  For the ancient city has become the hippest, trendiest, most “in” place on the continent.

From sophisticated nightclubs to street bars for bohemian hipsters, Lisbon boasts many of the “Best Bars in Europe” – scroll through the pictures in the link to see why.

For all this and so very much more, CNN calls Lisbon “The Coolest Capital in Europe.”

As an Escape Artist, you owe it to yourself to experience all this personally.  To do so, consider coming on an Escape Artist exploration of California in Europe with Wheeler Expeditions.

Portugal seems small on a map of Europe, but it’s amazingly large once you get here.  We’ve focused on Lisbon, yet there’s almost unbelievably more throughout the whole country – from Porto and the Douro, to Alentejo and the Algarve – and beyond, from the Azores to Madeira.

To learn more about how to explore California in Europe with Escape Artist and Wheeler Expeditions, click here.

We look forward to exploring Portugal with you! 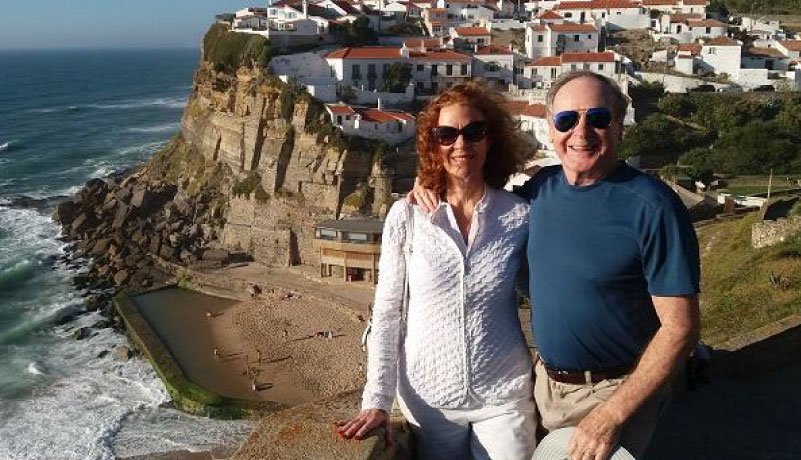 Jack and Rebel at Azenhas do Mar