It’s April 15, 1981. With the wind chill, it’s around 50 to 60 degrees Fahrenheit below zero. I’m sitting on my heels in the back of the Twin Otter and looking out the open door of the plane to the sea of white below. We’re 8,000 feet above the ice, making our jump run. Some tiny black specks appear on the ice in the distance. “Left five degrees!” I call out through my face mask, and Rocky nudges the Otter toward the specks.

“More left!” I yell again, and as Rocky looks around to make sure, I nod and point left with a gloved finger. When the spot’s set, I point ahead, yell “Straight!” to Rocky, then close my eyes and turn inward. About thirty seconds to go.

“All right, man, how do you feel?’ I ask myself. “Are you nervous?” I take a deep breath and relax, just letting whatever emotions are there come up. I expected the reply to be, “What, are you kidding?! I’m terrified!!!” But no – to my surprise, I feel incredibly calm and peaceful.

The negative memories of a year ago are distant. Back then, I didn’t know how to do this and needed to fast. Learning how to sky-dive quickly was an interesting experience. When you’re in the air, if something goes wrong – which happens more than once when you’re learning – you’ve got to figure it out and solve the problem right now, or else you bounce.

I had to learn, because a group of sky‑divers had hired me to take them on an expedition to the North Pole in an attempt to break the Guinness World Record for the “Most Northerly Parachute Jump”.

The Geographical North Pole is at 90° north latitude, which is at right angles to the Equator at 0° latitude (thus the South Pole is at 90° south). There is no longitude, since all lines of longitude or meridians, 0 to 180 East and West, meet at the top (and at the bottom) of the world. The Guinness record which we were trying to beat was set by a Canadian, Ray Munro, in 1969, who made a parachute jump from a static line onto the Arctic Ocean at 89° 39’N, i.e. 21 nautical miles off True North. 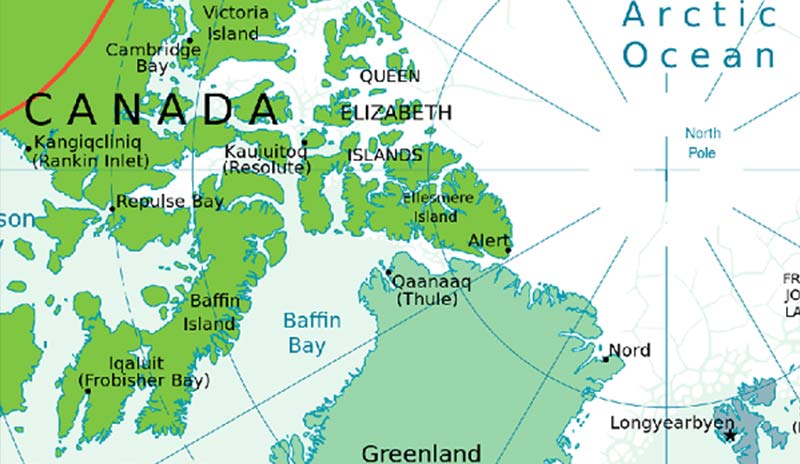 Map of North Pole and Surroundings

Taking people to remote places in the world is how I make a living. I led the first‑ever commercial expedition to the Pole in 1978, and this is my fifth time there.

To reach the area of the Pole, we fly commercially to Resolute in Canada’s High Arctic, charter a De Havilland Twin Otter with hydraulic skis to a base camp at Lake Hazen on Ellesmere Island, lay down a fuel cache up on the ice at about 86° north for refueling, then fly the remaining 4 degrees to the Pole (there are 60 nautical miles to the latitudinal degree, or 69 statute miles).

If the weather and ice conditions are just right, we can land on the ice at 90° north. The only safe time of year to do this is in April, after the sun comes above the horizon in late March, but before the sun starts to break up the ice (at the North Pole, the sun rises for the first and only time each year around March 21st and sets on the September 21st).

In addition to the jumpers, I had a bunch of ham radio operators who wanted to broadcast for the first time from 90° north, and an ABC film crew from the American Sportsman television show. It was a total zoo. An ice-crystal fog blanketed the Pole and we had to land on the ice barely above 89°, more than 50 miles off true north.

With a grand total of 12 training jumps under my belt at a drop zone in Perris Valley, California, I jumped out over the Arctic Ocean with the rest of the guys, and landed in a jumble of jagged pressure ridges half a mile from the plane. Although we consoled ourselves by claiming a freefall record (the record we were trying to beat was done by a static line jump), it was a somber and quiet flight back to the Lake Hazen base camp on Ellesmere Island.

Now it’s one year later. April 15th, 1981. A year ago, I didn’t even know how to pack my parachute – the other jumpers had to do it for me. For a year I practiced, going every weekend to Perris Valley. Now here I am – and I’m alone. No other jumpers, just me. The specks way down there on the ice are regular people who wanted me to take them to the top of the world for the sheer exhilaration of it.

This time, there’s no fog. We landed the Otter bang‑on 90° north according to our computer navigation system, everyone stepped out onto the ice, we took the doors off the plane, dumped the fuel drums out, I got my gear on, and Rocky and I took off again.

I asked Rocky – Capt. Rocky Parsons, a good old boy bush pilot with thousands of hours flying in the Arctic – to take the Otter to eight grand as I wanted over a mile of free fall, then “spotted” the jump run.

I open my eyes from my short meditation. The tiny dark specks are right beneath me. “Cut!” I yell to Rocky and make a slashing gesture with my hand across my neck.

Rocky nods and throttles back the engines to idle. I give him a thumbs up and bail out the door.

I launch out into cold empty space… and I’ve never felt so serene and at peace with myself in my life. 8,000 feet up in the air, falling out of the sky and flying free.

Below me lies an unlimited expanse of white – the blue cloudless vault above, the sheet of the frozen Arctic Ocean below, stretching to the horizon and beyond in every direction. Directly beneath me is the center of all these millions of square miles of ice: the North Pole, the apex of the Earth’s axis around which the entire planet spins.

Here I am, falling at 120 miles an hour right on top of the world’s spinning axis.

The ice is far from featureless. The bright sun makes it sparkle and brings out various tints of light pink and turquoise. Flat meadows of ice pancakes are everywhere, amidst piles of rubble ice where the cakes smashed together. Pressure ridges – where fault lines in the ice created by the ocean currents ground against each other, buckling up enormous blocks of ice 10, 20, 30 feet high into ridges that ran for miles – coil and writhe in crazy quilt patterns.

Off in the distance, there’s a large polynya – an area of open water in the ice pack. In another direction, a blue­-black lead – where a fault line has split the ice apart creating a river of water –snakes through the frozen sea. When leads freeze back over, they make a seductively smooth runway of ice, a tempting landing spot.

Rocky had to resist the temptation, and searched for an “old frozen‑over lead” that had been locked in the ice all winter and was at least 3‑4 feet thick. Luck was with us, for we had found one exactly at 90.00 north.

It’s towards that spot I’m hurtling. Years before, I saw a film showing this sky‑diver in the air having the time of his life doing somersaults, back-­flips, and triple‑gainers. His partner, filming him with a helmet camera, swooped in for a close‑up. Coming out of a double back‑flip, he looked into the camera with an expression of totally wired rapture. I promised myself that someday, I was going to experience that myself.

That someday is now, sky‑diving onto the North Pole. I’m doing front‑flips, back‑flips, quadruple‑loops – dancing in the sky, whooping and hollering at the top of my lungs. A supremely ecstatic moment – the way it should be when you accomplish something that goes into The Guinness Book of World Records.

Coming out of a gainer, I look at my altimeter: 2,500 feet above the ice. Time to get serious.

From a flat and stable face‑to‑earth position, I grab the toggle of the hand‑deploy tucked into a velcroed pouch on my harness leg strap. Pulling out the little white pilot chute, I glance over my shoulder to see it fluttering, then let it go. I look up to see the main canopy exploding out of the container bag and start to grab air.

This is the moment of truth, when the canopy either deploys correctly or malfunctions. I reach for the steering toggles and yell up at the unfurling parachute, “Come to papa, baby!” With a loud final whap!, the canopy opens completely. 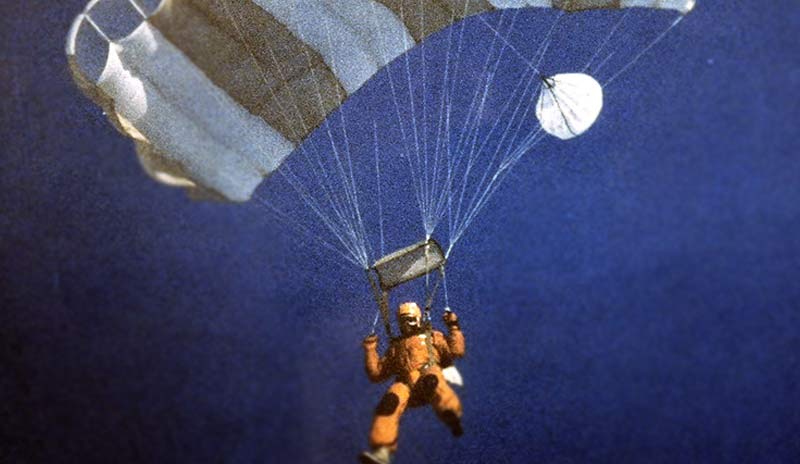 Silence. Before there was the tremendous whoosh of the air while in free fall, accompanied by my loud exuberance. Now it’s so quiet, save for the gentle rustle of the air flapping the tail of the canopy.

Stillness. A second ago, I was screaming through space at 120 mph. Now I’m floating in mid‑air, seemingly motionless.

Cold. During free fall, I was too wired and pumped to notice the cold. Now I notice that my fingers, wrapped through the straps of the steering toggles, are aching and going numb. Although mittens are much better at keeping your fingers warm than gloves, I have to wear the latter for grabbing the hand‑deploy and working the toggles.

With the altimeter reading 1,500 feet, I think, “I might as well have a little fun flying the canopy.” Pulling down hard on the right toggle, I swoop it into two tight spins, then hard down on the left and S‑turn it back.

I set up the approach. No longer specks, the people on the ice below me are looming closer. I fly past them and the ice comes up to meet me. As I pull down hard on both toggles, the canopy flares, stopping my forward motion.

And since you can’t get more north than ninety, it’s a record that will stay put. As the 1984 edition of Guinness says, “Wheeler’s record is one that cannot be bettered after setting.” 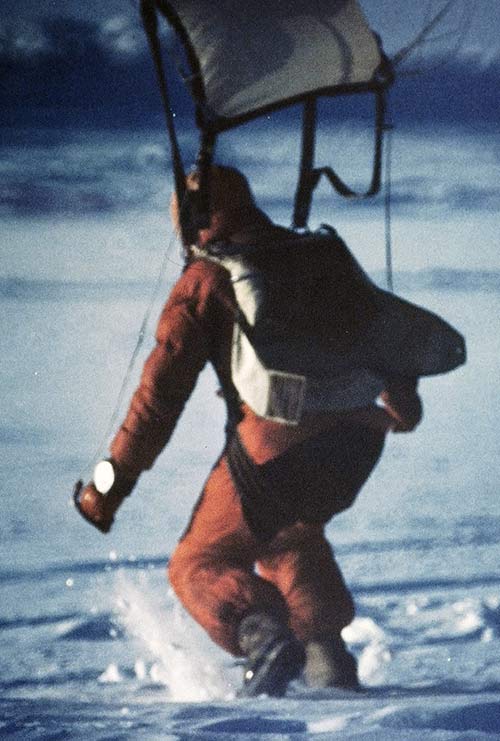 Out comes the Dom Perignon champagne. We pour it into plastic champagne glasses and drink it down quickly before it froze. Down here on the ice and with no wind chill (I’ve rarely experienced any wind right at the North Pole), it’s still a brisk 25 below Fahrenheit.

Rocky comes in to land and starts refueling with the fuel drums as everyone takes pictures and revels in being at one of the world’s most magical places. Refueling done and doors back on, we clamber back in for the five‑hour flight back to Ellesmere.

A Magical Experience in a Magical Land

The Ice Ages are still in full swing on Ellesmere Island, the northernmost island in the Canadian Arctic. To witness that world of gigantic glaciers and majestic black peaks jutting sharply through them, of massive ice caps and vertical mile‑deep fjords, of icebergs by the thousands, the world of musk‑ox and polar bears, of 24‑hour sunlight where the sun just revolves clockwise in the sky around you and never sets, and to make friends with this world’s inhabitants, a special people who call themselves the Inuit – all of this is an experience you will tell your grandchildren about.

And that’s my definition of an adventure: a thrilling experience you never forget for the rest of your life. That’s what Wheeler Expeditions does: we give people those kind of experiences. I certainly had done that for the people with me on this trip, I thought, as the Otter flew over the stark magnificence of Ellesmere.